Archive: information and pictures from 2000 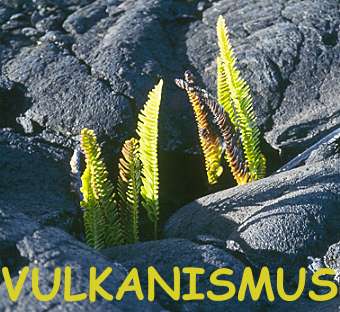 The Hawaiian volcanoes now hold few secrets. The researchers at Hawaii Volcanoes Observatory, which is located on the crater rim of the Kilauea on Big Island can today predict very precisely when the next eruption will take place and where the lava will come to the surface. For decades no one has died in a volcanic eruption and houses can be evacuated in good time after a warning.

Hawaii's volcanoes are peaceful, they are often compared to a saucepan without a lid: the contents boil and occasionally boil over, but there is no pressure that is discharged in explosions and ash rain and small gases are created. The magma creates streams of lava, which then spread over several kilometers. Nowhere in the world are there such easily accessible, hardworking and peaceful volcanoes as here.

The Kilauea on Big Island will be one of the most active volcanoes on earth for the next 400,000 years. Today it towers 1,000 meters over the Pacific Ocean. But according to the researchers' forecasts, it will grow to an altitude of over 4,000 meters. This is known from the history of the Hot spotVolcanic chain that extends to the Chinese continental shelf.

The volcanism in Hawaii did not develop on a continental edge zone, as elsewhere, where individual tectonic plates rub against each other, but in the middle of the huge Pacific plate. It moves over a particularly hot spot in the earth's interior, where tremendous heat comes from the depths and pierces the earth's crust like the flame of a cutting torch.

Of this Hot spot the Pacific plate is perforated and so the volcanoes are formed, which carry huge amounts of magma to the surface. If the plate continues to move (10 cm per year), it will burn Hot spot a new hole in it.

So it is already growing 30 km southeast of Big Island a new volcanic island is approaching, still undersea. It already has a name: Loihi. It is 4,000 m high from the sea floor, and 900 m are missing from the sea level. A real "baby volcano". He also has his own website: Loihi Vulkano

The magma here in Hawaii has a particularly low proportion of silicon. It is therefore very thin and, once on the surface, loses its gas content. Then it freezes in bizarre shapes, gas explosions do not occur. The Hawaiian lava forms basalt, depending on the temperature and texture, different structures arise in the ground and on the surface when it cools.

A'a lava has a temperature between 500 and 800 ° C, it flows slowly, contains a lot of gas and solidifies sharp-edged and rough. The Hawaiians called them A'a because walking barefoot only made progress while screaming in pain.

The hotter and faster flowing one Pahoehoe lava has a temperature between 800 and 1,100 ° C, contains little gas and forms smooth, wavy basalt shapes. Sometimes they look like mush or like a coiled rope.

It is fascinating how quickly the cooled lava is conquered by plants. First come the ferns, in a good 20 years a lava flow will be overgrown by bushes.

Above is my little lava collection, the pictures were taken on the Big Island, where the "Chain of Craters Road"Every day lava becomes new land.

Here are some very interesting links on volcanism with much more information on this interesting topic, but in English: