How were streets in the 19th century 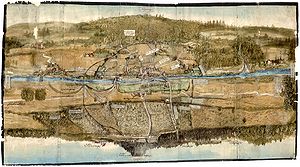 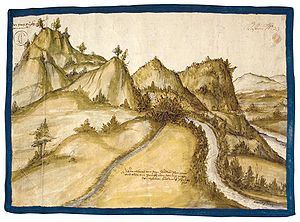 Plan of the road and bridge over the Lech in the area of ​​Schongau an dem Epruss and Bruckberg (or Puckberg). (Bavarian Main State Archives, plan collection No. 844)

The ancient streets were still used in the transition from antiquity to the Middle Ages, but were not repaired or expanded. Roads that were not based on the ancient remains were oriented towards elevations (e.g. passes, ridges) or river crossings into the High Middle Ages. In the course of the emergence and growth of cities and markets, roads developed into transport hubs in the 12th and 13th centuries and shifted to the valleys. An extensive system of trunk roads was created primarily through targeted economic, transport and territorial policy. At the same time, a dense network of regional and local routes for pedestrian traffic emerged. Road maintenance improved from the 16th century. However, an efficient, well-developed road network did not emerge until the 18th century with the construction of artificial roads, the Chausseen (in spa Bavaria from the 1760s).

The basic - but fluid - differentiation of the medieval transport network into streets, paths and alleys has been refined over the centuries. Historiography played a special role in this: the terms Poststrasse, Pilgerwege, Salzstrasse, Königsweg mostly originated from research and presentation intentions or from special areas of interest. Functions highlighted in tradition or research were mostly not given. Military roads were rarely used by the armies, but mostly by trade. From royal roads, military roads and imperial roads, trade routes, official and postal routes emerged. Certain routes could be geared towards a specific purpose, e.g. B. the Salzstrasse Rosenheim ‒ Landsberg am Lech and the Rottstrasse from Augsburg to Venice.

In the case of medieval streets, research is largely dependent on indirect sources, on junctions, cities, bridges, passes, written evidence and on information that can be derived from special events. While abundant sources on the course of streets can be found in Italian cities as early as the 12th century, tradition in Germany today, with a few exceptions, does not begin until the 13th, mostly in the 14th century. The royal and military roads of the Middle Ages can be reconstructed from itineraries and travel reports, but always as straight routes between the named places. It was the royal palaces, royal courts and royal estates as well as the episcopal seats and monasteries that had determined the structure of the road network.

In the early modern period, basic regulations on the responsibilities for the system, maintenance and monitoring of the condition of the traffic routes are contained in the Bavarian state regulations of 1553 and 1616. Concrete road courses can usually only be made accessible via indirect sources - customs, escort, border disputes, trade relations. The early road maps are also reduced to stage points. 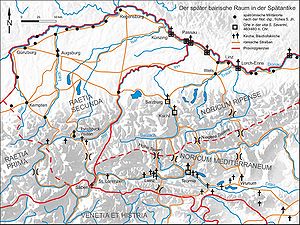 Ancient roads in the area of ​​today's Bavaria (map from: Hubert Fehr and Irmtraut Heitmeier (ed.) The beginnings of Bavaria. From Raetien and Noricum to early medieval Baiovaria. St. Ottilien 2014, intent) 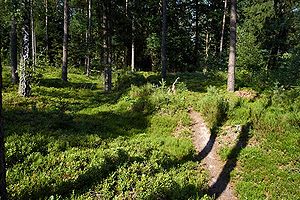 The routes of the Golden Road from Nuremberg to Prague are partly recognizable by the ravines that still exist, like this one near Hirschau. (Photo by Dietrich Krieger licensed by CC BY-SA 3.0 via Wikimedia Commons)

In the Roman Empire, routes and roads were planned and executed by the central authority and in standardized procedures. As ground monuments, they still bear witness to their course. The Via Claudia Augusta from Rome over the Reschen Pass to Augsburg and into the Donau-Ries is the oldest paved traffic route in Bavaria. Because of its excellent development, it formed the guideline for the Italian trade until modern times. In the transition from antiquity to the Middle Ages and beyond, the Roman roads were used, but hardly repaired or even expanded. The central planning, controlling and financial powers were missing.

Until the high Middle Ages, the streets - if they were not based on Roman roads - were oriented towards passes, river crossings, the foot surfaces of ridges or ridges. With the emergence and growth of cities and markets in the 12th and 13th centuries In the 19th century, these developed into traffic hubs. The old road network shifted into the valleys, directly or indirectly influenced by the older contour lines (example: Goldene StraßeNürnberg-Prague) due to escort rights, toll and customs offices, stacking rights as well as road orders or prohibitions. In the Middle Ages, for example, there was already an extensive system of trunk roads with a large number of side lines on all sides. In particular, the large trading centers of Augsburg, Nuremberg and Regensburg in today's Bavaria gained supraregional importance. The highways in and through Bavaria were part of a European transport system. In the expansive phase of urban development in the 12th and 13th centuries, a central network of connections with the surrounding area was established.

In the Middle Ages and the time of territorial formation, manorial and urban developments as well as a targeted economic and transport policy played a decisive role in the creation, design and consolidation of routes and transport networks. The privileges of the 13th century for the princes (Statutum in favorem principum 1231) meant that the late medieval and early modern road network hardly underwent any changes until the end of the Old Empire. 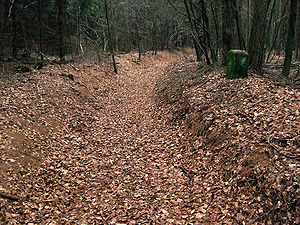 This ravine near Lohr am Main was part of the Birkenhainer Straße between Rhine and Main Franconia. (Public domain via Wikimedia Commons)

In the Middle Ages, the narrower spatial adaptation of the line layout resulted in extensive expansions of the paths and lanes in the actual route layout, but also adjustments to corridor, usage and territorial boundaries. From the Middle Ages to the 19th century, a growing network of local pedestrian connections emerged in regional and local traffic. The small-scale traffic served to connect to the nearest market or central location. Paths with mostly a small local radius connected production and market centers with consumer locations and often had no connection to end-to-end connections. This local traffic had its special weight in the supply of the population. Artificial roads developed from the natural traffic routes, so to speak, as a recourse to Roman times, such as the Hochstraße in the Augsburger Straßvogtei, and finally the highways from the middle of the 18th century. 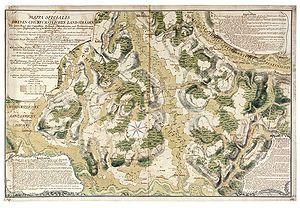 Maintenance, repair and expansion, especially of major highways, are signs of a targeted economic, transport and territorial policy. This was also the purpose of the attempt to direct traffic flows through its own territory and in its cities and to customs posts, such as the construction of Kesselbergstrasse in 1492. Road maintenance only improved from the 16th century onwards. However, the stagnating technical possibilities of the means of transport and the countless customs and toll booths only improved the efficiency of land transport to a limited extent. This remained so until the beginning of the construction of the Art Route in the 18th century. It was not until the 17th century that road construction regulations became generally known. Before that, the interests of territorial lords, of monasteries and churches (pilgrims, pilgrimages), also of merchants (rod orders) led to individual measures (see also: Störmer, highways and monasteries).

Centuries later, planned roads were built again. In the Sachsenspiegel (II.60.§ 3), the specification for the street width was less geared towards expansion and more towards traffic regulation. Although the issuing of tolls and customs duties was aimed at maintaining the roads, the systematic maintenance of the transport facilities was largely limited to bridges and river crossings and the access and exit ramps required by the location until well into the early modern period. In the vast majority of cases, the roads for land transport were nothing more than lanes, which were kept reasonably stable in periods of bad weather by the application of brushwood, in special cases they were strengthened by the construction of billet dams.

From the 18th to the 19th century, mercantilism and industrialization required the expansion of the existing network of roads, with state supervision and administration showing good results, as in Roman times. With the construction of the artificial roads, the "Chausseen", the traffic shifted more and more to the new traffic routes; numerous side routes lost their importance. In general, the expansion of the road started in France, but as early as 1599 Julius Echter von Mespelbrunn, the bishop of the Würzburg monastery (ruled 1573-1617), issued road construction regulations (Schäfer, Schweinfurt, 59). In old Bavaria, approaches for this can be seen in the Bavarian state order of 1553 and in the land law of 1616. "Chaussings" carried out in old Bavaria since the middle of the 17th century were simple gravel or stone embankments. In 1737 a road construction order was issued in the Swabian district, in 1764 in the Franconian district an imperial ordinance for the repair of military and commercial roads (Schäfer, Schweinfurt, 223, 238). A "General Road Construction Directorate" was set up in Kurbayern as early as 1751. As early as 1766, most of the "main, country and commercial roads" were designated as "chaußirt" (Meyr, collection of the Kurpfalz-Baierische general and special state regulations 1). During this time, numerous drafts and plans for road expansion were drawn up all over Bavaria. Large numbers of them prove the continuity of the traffic routes up to our time (BayHStA, plan collection 7350: Salzstraße Stegen - Buchloe from 1770 = B12 up to the expansion of the A 96; BayHStA, plan collection 7389: variants of the roads from Weilheim to Landsberg am Lech from 1776 ). 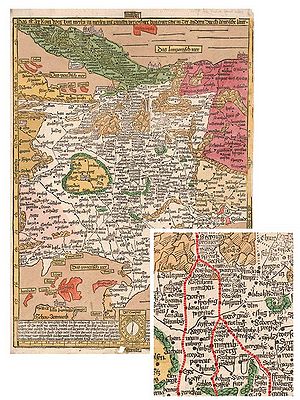 Map of the Rome route by Erhard Etzlaub (c. 1460-1531 / 32). The routes through Bavaria are highlighted in color on the enlarged section. Fig. From: Erhard Etzlaub: This is the Rome away from meylen to meylen with points forgiven from eyner stat to the other by deutzsche lantt, [Nuremberg 1500?]. (Otto Schäfer Schweinfurt library, licensed by CC BY-NC-SA 4.0) 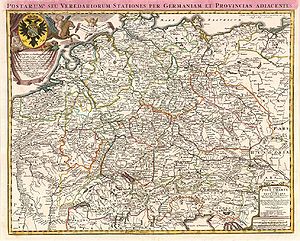 From the time before the advent of road maps, information about connections between cities comes from itineraries from the 13th to 15th centuries, travelogues, campaigns, pilgrimages, study trips, but mostly from the correspondence and books of merchants and from mileage indicators and route maps of the 16th century with concrete - although initially still very incomplete - evidence.

The streets did not find their way into cartography until the 16th century. The "Romweg-Karte" by Erhard Etzlaub (1460-1531 / 32) is called the first road map of Central Europe. It also only shows the distance between the stage locations (example: Augsburg - Partenkirchen). A detailed course of the road can hardly be seen from the first European road maps. Vicinal and local connecting routes are not included. The possibilities for the reconstruction of traffic connections are manifold. Examples are: The invitation to a fair planned for 1439 in Ulm at over 400 locations, including 150 cities in Franconia, Swabia and Bavaria (Stadtarchiv Ulm A. o. 20. Markets and trade [establishment and holding of fairs]). Using the regionally structured lists, the routes of the messengers can be derived and numerous routes can be determined, even as far as Cham in the Upper Palatinate, Kirchberg in the Bavarian Forest or Vilshofen on the Danube (Ammann, Vom geographischen Wissen). A Coburg document from 1492 (StAC, GA II No. 12 [Kastenamts-Erbbuch Coburg]) contains a directory of the escort from which streets in different directions can be accessed (Höhn, Altstraßen). The "Raißbüchlin" Jörg Gails, printed in Augsburg, dates back to 1563, the oldest German route handbook from which a Europe-wide road network can be reconstructed (Krüger, The oldest German route handbook).

Such plans, drawings from border disputes and also the original cadastre at the beginning of the 19th century contain innumerable comments, references, and anomalies that enable a reconstruction of old streets up to small local connections. Much preparatory work has been done in local history research; However, due to the lack of a suitable, temporally stratified database, access is laborious and often limited to chance finds (example: Benno C. Gantner, Die Siedlungs- und Stadtentwicklung im Raum Peiting, Altenstadt and Schongau based on the evaluation of land maps from the original cadastre 1810-1818).