Which electric guitars are the most dubious 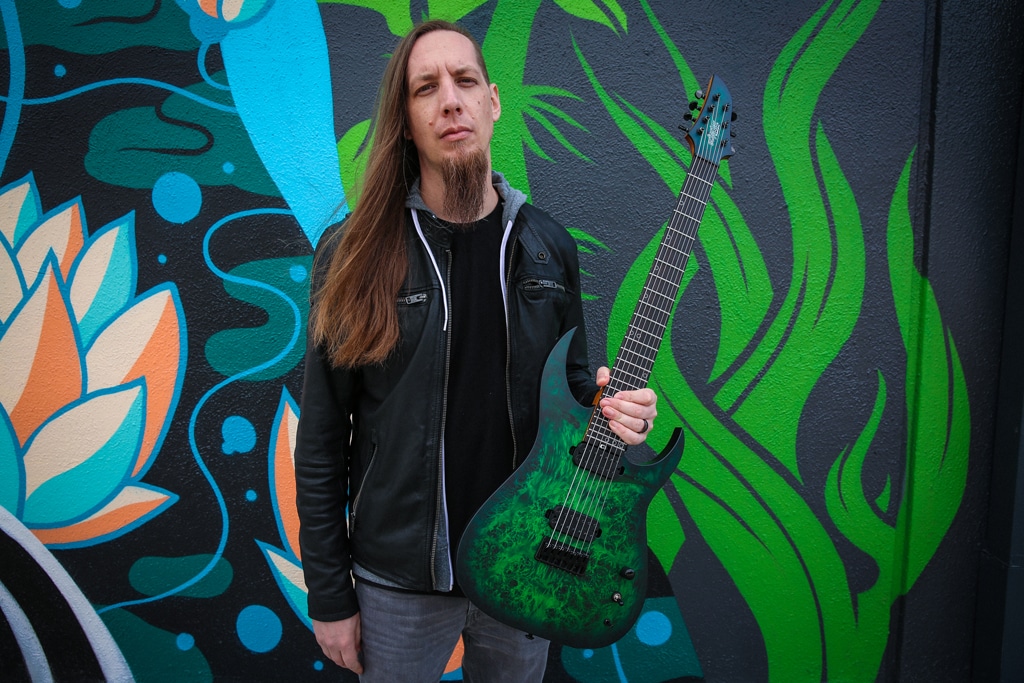 Keith Merrow is considered to be a very busy and extremely active personality in the modern guitar scene. The good man in the guitar industry has not only caused a stir in recent years through his YouTube channel. With the Schecter KM Signature series in particular, he has achieved a great success.

But even as a musician, Keith doesn't need to hide. On the contrary: in addition to collaborations with Jeff Loomis (Nevermore, Arch Enemy) and Alex Webster (Cannibal Corpse), he is also active as a solo artist.

Keith, you went online with your YouTube channel over 10 years ago. What was your original intention?

First of all, it's unbelievable that it was over a decade ago. When I started on YouTube, I definitely had no plan at all. And I don't think anyone else in the guitar industry had a plan back then about what to do with YouTube. A good friend originally instigated me to do this after seeing an old DV camcorder lying around with me. He said I should upload videos of my songs to this website called “YouTube”. He was convinced that I would hit a nerve with a lot of people with my songs. I wasn't at all enthusiastic about the idea at first. I just didn't like the idea of ​​posting videos of myself sitting on the edge of the bed playing guitar. Until then, I had mostly written music for myself and only shared it with friends and family, if at all.

But in the end I thought: "Why not?" From then on I saw YouTube as a medium on which I could share my music with the world. And it turned out to be the best decision of my career. Almost immediately, people asked me where to buy my music and my number of followers kept growing ... and I grew with them. I never had a plan, I just let it happen. After a while, various manufacturers of guitars, pickups and amps approached me and asked if I could make demo videos of their products. In the long term, however, I didn't really enjoy it, so now I focus more on my music on my YouTube channel, as I did in the early days. To this day I don't see myself as a “YouTube guitarist”: When people follow me, it's because they like my music, not because I ask them to. Nonetheless, my career has built on YouTube successes.

In addition to YouTube, you've also made a name for yourself in the metal guitar industry. Would you say YouTube opened those doors for you, or have you worked in this industry before?

Without a doubt, YouTube opened many doors for me. But I think my success also has a lot to do with the decisions I made behind the scenes. At the end of the day, everyone makes their own fortune, and fortunately I've made some right decisions in the past. Some colleagues in the industry find me too calculated, but I think I just have a knack for navigating the deceptive waters of the music industry and getting the best out of it for myself.

To be honest, I find working with and in the music industry relatively easy, at least compared to the jobs I previously had to do to make a living. I've been trampled on all my life - these days I have an extremely good compass when it comes to navigating the intentions of various players in the music industry. And it's nothing new that this industry is teeming with dubious intentions.

One of your greatest successes to date is likely to be your signature model from Schecter Guitars. When did Schecter approach you?

Neither Schecter nor I saw the great success of my signature guitar coming. I am extremely grateful for this partnership, and the people at Schecter have become something of a family for me. The contact came about when I was working with Jeff Loomis on the album for our project Conquering Dystopia in 2012. I wasn't a big name for Schecter at the time, but Jeff told them not to miss the opportunity. I am very grateful to him for that! But it has to be said that Schecter didn't immediately offer me a signature model. First of all, they wanted to see how I get along with their regular models.

I liked the SLS C-7 extremely well and I let the guys at Schecter know that too, but the contact was very sporadic for a while and I thought we wouldn't work out after all. Another manufacturer contacted me, I was about to sign a contract and suddenly Schecter came out of nowhere and offered me a signature model. Apparently they had been working on it for the past few months ... And I thought they were no longer interested. So I chose Schecter - and it was the best decision I've ever made.

The Schecter KM-7 is already in the third generation. What was particularly important to you when designing the first version, what did you learn from the respective design processes and why is the MKIII the best KM-7 so far?

The first KM was still loosely based on the already mentioned SLS C-7. For good reason, I was initially only given very limited design leeway. My signature was initially supposed to be an offshoot of an already very successful model, so I couldn't just design a brand new guitar from scratch. But I knew that I could optimize the design of the SLS C7 and make it more individual. My goal was to use tonewoods and materials that I was used to from my expensive custom shop instruments, but at a price that is affordable for almost everyone. I wanted the KM-7 to be a guitar for people like me - not just a guitar for me.

So I decided not to design my signature with flashy graphics or inlays, but rather subtle enough that it would also be attractive to people who do not know me at all. And that definitely worked.

After the original KM-7 was so extremely successful, I was given significantly more design freedom for the second generation. Schecter trusted my ideas - after all, they had proven their worth. And after the KM-7 MKII was as successful as the first, they gave me absolute control and freedom over the design of the MKIII. What the MKIII does best for me is that, in my opinion, it is the first true Keith Merrow signature guitar. It is not based on existing Schecter models, but has been developed from scratch.

Every feature, every specification, simply every corner and edge is based on my design, right down to my Fishman signature pickups. I spent weeks in the Schecter Custom Shop and actively participated in every step of the development. From the prototype to the final product, the guitar was created before my eyes. The MKIII is the ultimate guitar for me.

After working with Seymour Duncan for a while, you are now also an artist at Fishman. What makes this manufacturer so unique for you?

The level of innovation and experimentation at Fishman is an absolutely unique selling point in the pickup industry.

Technologically, there has not been such breakthrough developments in the field in decades as what Fishman is currently delivering. The most impressive thing for me is the “voicing process”, which is of course top secret. With traditional pickups you sit at a workbench and wind a wire around a spool in a certain way, more or less hoping for the best until you are “close enough” to your ideas. And then you have to hope that that can be consistently reproduced.

With Fishman, I was able to achieve 100% the sound that I had in mind. I was hooked up to a computer and with its system was able to adjust every tonal aspect of the pickup in real time. Even how percussive the pick would sound. It really is incomparable! Not only was I able to find my perfect sound - it also took just a single day instead of weeks. And because the Fishman Fluence coils are 3D printed, the result is also much more consistent than the copper wire coils on a traditional pickup.

You are also successful as a musician. You have not only started collaborations with Jeff Loomis, but also recently released a solo album under the name 'Alluvial' with Wes Hauch (The Faceless, Glass Casket) under the name Merrow. What do you enjoy more? Collaborate with other guitarists or work alone?

Working with Jeff Loomis on the Conquering Dystopia album has been one of my best experiences as a musician. It was very relaxed and the songs just blurted out of us. Jeff is a free thinker and has incredible talent. I am very happy that I was able to work with him. Working with Wes Hauch for Alluvial was a little more methodical. Wes thinks over every note and has an extremely precise vision for his songs. We pushed each other and the writing process was very emotional - definitely a little more exhausting than the process with Jeff Loomis. But I think we are both very proud of the result. However, writing solo is the most familiar to me. The process is very different and has a much more therapeutic effect on me. I don't set myself any limits creatively and like to get lost in my songs.

It's like writing a soundtrack for my life. And it's not just hugely fulfilling - I actually need this process to stay sane.

In your opinion, what is the difference between Conquering Dystopia, Alluvial and Merrow?

Conquering Dystopia goes straight in the face. Jeff's solos and licks are a very obvious highlight, but Alex Rudinger's drumming and Alex Webster's bass playing are also world class. The four of us created something with our self-titled album that is very different in terms of vibe from our usual bands and projects. Alluvial, in contrast, is a bit heavier and darker. It's not quite as technical as Conquering Dystopia, but the compositions are very emotional and intense. And my solo album, Reading the Bones ‘, goes a step further in that regard. It's probably my least technical project and instead feels a bit more soundtrack-like and atmospheric. I often write my solo material while traveling internationally or when I'm retiring on my own. The songs become a kind of diary for me and are accordingly varied. There is a wide range from gloomy to optimistic sounds.

You toured with Alluvial and Conquering Dystopia. Is that also up for debate for your solo material and in what form can you otherwise be seen live?

I would love to do some merrow solo shows ... and maybe I will! I generally already play my songs live, but usually more in clinics and workshops in the USA and overseas. I really enjoy playing these solo shows as they give me the opportunity to interact very personally with my fans.

Last but not least, a final question: someone who is as busy as you certainly still has an ace up his sleeve! What's next for you?

There will be a new Conquering Dystopia album, I will be releasing more solo material and working on the next generation of the Schecter KM-7. I also develop products for guitarists myself, but I can't reveal too much about them yet.