When did Ptolemy discover the geocentric theory?

Geocentric view of the world

In the geocentric view of the world, as the name suggests, the earth (geo = earth) is in the center, in the absolute center of the world. Everything else revolves around them, i.e. the sun, the moon, the planets and even the stars. The earth itself rests in the center and does not move at all. This view was coined in ancient Greece and is widely accepted and considered true in Europe and the surrounding areas.

Above all Aristotle was concerned about the structure of the world. He lived in ancient Greece from 384 to 322 BC and was a respected philosopher who knew a lot about many sciences. Among other things, he dealt with the movements of the heavenly bodies and then came to the conclusion that they apparently revolve around the earth.

Everything below the moon belonged to him to the sublunar, earthly realms, which are imperfect and changeable and are ruled by the elements fire, earth, air and water.

Everything above the moon was part of the heavenly, supernatural, which is characterized by absolute perfection and remains the same for all eternity.

Since the sphere and circle were considered perfect geometric figures in ancient times, it was clear to Aristotle that the heavenly bodies are perfect spheres and move on perfect circular paths.

Claudius Ptolemy took up Aristotle's worldview around 140 AD and tried to describe it mathematically. He did this with a complicated system of circles, auxiliary circles and additional axes. Now it had become possible to calculate the positions of the heavenly bodies for years in advance, which enabled astrology to flourish, which could make predictions for events on earth based on the planetary positions in the sky.

The geocentric view of the world lasted for over 1400 years from Ptolemy and was only replaced by the heliocentric system of Copernicus in the 16th century, which sees the sun in the center and makes the earth a simple planet.

Structure of the geocentric worldview

The geocentric view of the world is not so absurd, even if it is wrong. It simply corresponds to what one can observe in the sky every day: all celestial bodies move across the sky during the day, the sun and sometimes the moon during the day, and the entire starry sky, the moon and the planets at night. The next day they have all completed their lap and are starting a new hike.

The stars keep their position to each other and all move together. The distances to one another are fixed or fixed, which is why they are called fixed stars. In ancient times it was believed that the stars were all equidistant from the earth and that they were attached to a crystal bowl that surrounds the earth. 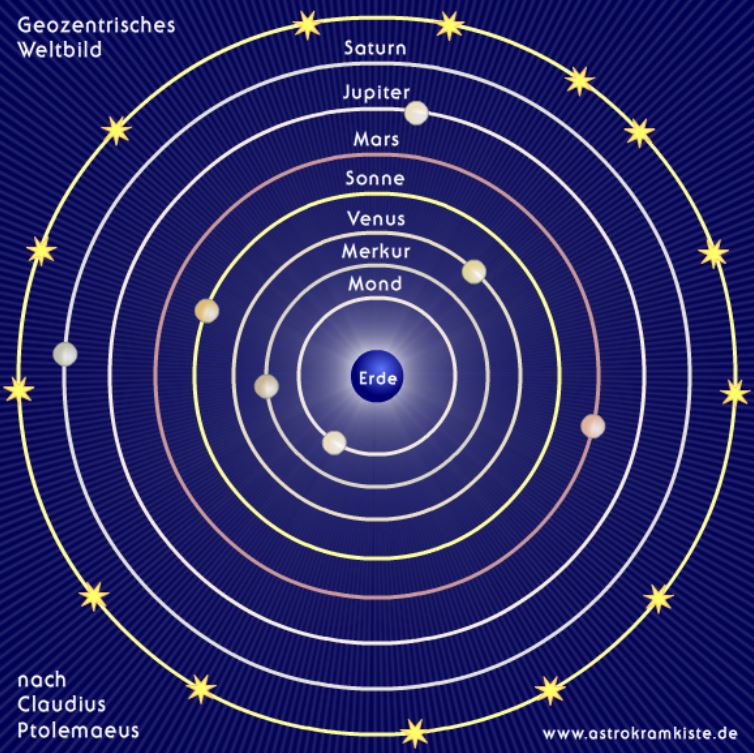 This bowl and the stars rotate once a day around the earth, which is in the center. However, one had to admit even then, the bowl rotates around the earth at breathtaking speed.

There is an animation of this idea on the Ptolemy Worldview page.

It was of course already recognized in antiquity that some spots of light simply move between the fixed stars and change their position in relation to them. These 'stars' were referred to with the term 'planet', which translated means walking star. Since each of these planets performs its own movement, independently of the others, each had to have its own crystal bowl to which it is attached so that it does not fall to earth.

The sun and moon were also considered planets. This is how you can imagine the geocentric worldview of antiquity (see illustration!): The earth sits in the center, the celestial bodies move around the earth on crystal bowls, in the order moon, mercury, Venus, sun, Mars, Jupiter and Saturn (no more planets were known then).

The stars sit on the very outside of the outer shell and also rotate around the earth with their crystal sphere. Since the bowls are spherical, the celestial bodies move on perfect circular paths.

Problems with the worldview

The geocentric view of the world describes the daily movements of the celestial bodies quite well at first glance. But if you deal more intensively with astronomy and, above all, are a good observer, you will soon find some inconsistencies that do not want to fit so well into the system. 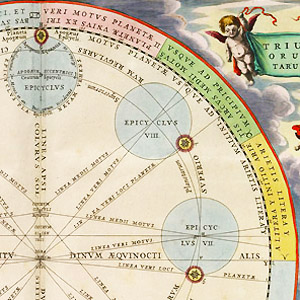 For example, we have the fluctuations in the brightness of the planets. With Mars, for example, you can see that very well. In a year it will be very bright and shine very conspicuously from the sky. In the next year, however, it is inconspicuous and hardly distinguishable from the stars. The transition is very gradual.

From this it can be concluded that Mars is sometimes very close to us and sometimes very far from us, which is indeed the case. In the geocentric system it describes a circle around the earth, in the center of which the earth is located, so it is always the same distance from us.

Mars also makes strange loops in the sky every now and then. At first it becomes slower and slower in its movement in front of the starry sky, then comes to a standstill and suddenly moves against the original direction. After a short time (a few weeks) it stops again and turns around, so now continues its path in the old direction. An animation can be found on the 'Observe Mars' page.

To get around this problem, Ptolemy came up with a system of circles and auxiliary circles, so-called epicycles.

On the main circle, the deferent, there should be a smaller circle, the epicyclic to which Mars is attached. Both circles spin, and the epicyclic guides Mars. The distance between Mars and Earth changes, it comes closer to us (and shines noticeably brightly in the sky) and then moves away again (and appears pale and inconspicuous in the sky). The loop movement can also be easily reproduced in this way (see also epicyclic animation).

However, such a system is not practical. A crystal bowl, to which the planets are supposed to be attached so that they do not fall down, could not carry out such movements. Another problem arises from the fact that one should not ask how deferent and epicyclic are connected to one another. In the graphic, it's a black line that connects the two and synchronizes their movements. But what is it in space?

The model describes the movements of the planets quite well, but only roughly. The inaccuracy is great.

Tycho Brahe designed a new geocentric model at a time when the heliocentric system of Copernicus was already known but was not recognized by everyone, including Brahe. He left the earth in the center, but gave the two planets Mercury and Venus orbits around the sun.

Together with the sun, they then circled the earth again. This view explains why the two planets never move far from the sun and why they can never be seen in the middle of the night, i.e. opposite the sun. 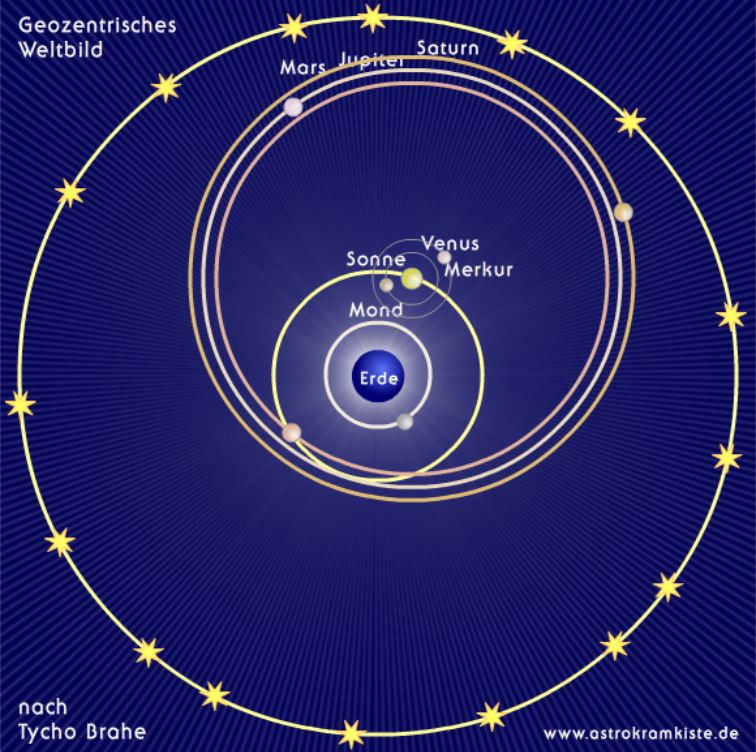 The other planets should also orbit the sun, and again the earth together with it. This explains the fluctuations in brightness, because the planets still move on circular paths, but now have different distances from the earth. However, the following problem arises here: from time to time the orbits of the moon and Mars overlap!

A click on the red button in the animation above hides the background and shows the orbits that the planets take in this world view. Then the overlap moon / Mars can be clearly seen.

So the tychonic model is a slightly better geocentric model than that of Ptolemy. But it could no longer prevail, because the time for the heliocentric system had already come.