Why do ionic liquids form 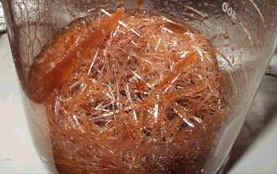 Methylimidazolium and pyridinium ions have proven to be good starting points for the development of ionic liquids:

Properties such as melting point, viscosity and solubility of other substances (starting materials, reagents, products and other solvents) are determined by the substituents of the organic compound and by the counterion. Many ionic liquids have been tailored to specific problems, which is why these solvents are often associated with the term "designer solvents".

One of the first salts, which is liquid at room temperature, was made with the mixture of [emim] Cl with AlCl3 discovered a series of equilibria between [emim] [AlCl4], [emim] [Al2Cl7] and [emim] [Al3Cl10] trains. This liquid is not stable to water. It was not until the discovery of water-insoluble RTILs such as [bmim] [PF6] has made it easy to work up reaction mixtures: water-soluble by-products can be removed by simple extraction. Transition metal catalysts, which are readily soluble in ionic solvents, can be recycled after the extraction of organic products with a non-polar, organic solvent. Distillation from an ionic liquid is also possible because these solvents have extremely low volatility. Ionic liquids are therefore of interest as alternative solvents for industrial processes, as they are often recyclable and enable easier product separation.

Ionic solvents obtained from fructose like the following are even a step closer to implementing holistic green methods:

The green solvent mentioned has already passed the test in the Heck reaction:

The absence of volatility is a big bonus of ionic liquids compared to low-boiling solvents, which generally results in a lower toxicity in the ambient air. The use of ionic liquids in microwave synthesis is also of particular interest, since the sudden development of pressure does not occur until the solvents decompose. In addition, the dipole character of the ionic liquids allows a particularly fast excitation by the microwave radiation and consequently faster reactions.

Please quote the page as follows:

The portal for
Organic chemistry