Does our heart have a brain

How the heart affects perception 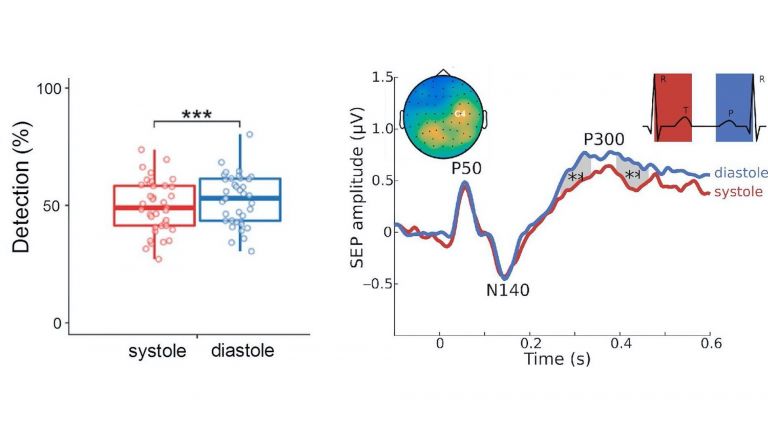 Our heart and brain are constantly communicating with each other. If we get into a dangerous situation, for example, signals from the brain ensure that the pulse rises - and decreases accordingly when the danger is over. Conversely, the heart also sends information to the brain and also influences our perception. So far, however, it is unclear how this works. Researchers at the Max Planck Institute for Human Cognitive and Brain Sciences (MPI CBS) in Leipzig and the Berlin School of Mind and Brain have now discovered two decisive mechanisms for this - and how these vary between individuals.

If the heart beats in its regular rhythm, it contracts during the so-called systolic phase and pumps blood into the body. In the subsequent diastolic phase, the blood flows back and the heart fills up again. From an earlier study at the MPI CBS we know that our perception changes in the course of this cycle. During the first phase, the systole, we are less likely to perceive an electrical stimulus on the finger than in the second, the diastole.

In the current study, the scientists discovered what the reason for this changed perception is: With the cardiac cycle, brain activity also changes. During the first phase of the cycle, a crucial part of brain activity, the so-called P300 component, is suppressed. One assumes that otherwise marks the transition into consciousness. If it is prevented, the incoming information is not consciously perceived. So the brain seems to recognize that the changes in the body caused by the pulse are not actually occurring in response to a changed environment. Rather, they are just a reaction to the regularly returning heartbeat. This ensures that we don't let our pulse disturb us every time. However, this mechanism also seems to have the effect that real external stimuli are not perceived during this phase - at least correspondingly weak ones.

During their investigations, the researchers discovered a second effect: the more a person's brain reacts to the heartbeat, the less likely it is that they will perceive the external stimulus. “During this time, attention seems to shift from signals that arrive from the outside to those that we receive from within,” explains Esra Al, first author of the study, which has now been published in the renowned specialist journal PNAS. A strong reaction of the brain to the heartbeat means that it is in a state in which it is more focused on information from the body and organs. Impressions from the outside world were left out at the moment.

The results are also of medical interest. They explain the connection between heart and brain function not only in healthy people, but also in diseases of these organs. “This could explain why people often develop heart disease at the same time after a stroke, and why - the other way around - people with heart disease are also restricted in their cognitive abilities - even though the brain areas responsible are not directly affected,” explains study leader Arno Villringer.