What is the HOMO LUMO concept 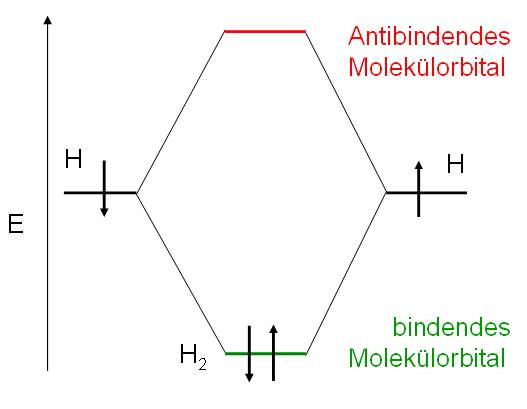 The energies that are released during the bond are basically composed of two parts. Once the ionic part

and once the covalent part

. The total energy is the energy that arises from the lowering of the atomic orbitals to the molecular orbital of both binding partners.

For one covalent binding

the molecular orbital looks like this (compare above with the hydrogen molecule):

For ethane the binding energy is approx

For one polar binding

For methanol the binding energy is composed of

. It is as mentioned above

the ionic part of the bond.

For one ionic binding 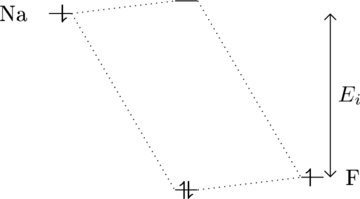 For sodium fluoride, the binding energy consists almost entirely of

The above values ​​are only approximately correct. Indeed, there are other factors to consider, such as the Spin pairing energy.

If an electron is in an orbital with another, the energy is slightly higher than if it were there alone. This energy is called the spin mating energy. 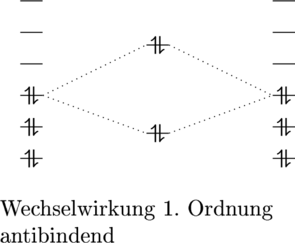 If, on the other hand, only one orbital, namely the binding molecular orbital, is occupied, a binding interaction occurs between the HOMO and the LUMO: 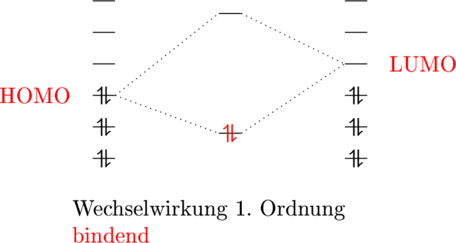 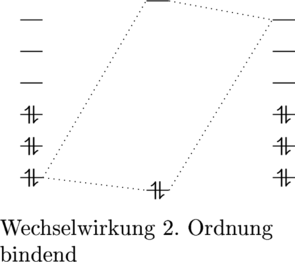 However, these second-order interactions are not so strong, which is why the HOMO and the LUMO contribute significantly to the stability of the resulting molecule.