What are Pastorelas in Mexico

Christmas is of course a highlight of the year in Mexico too - and is celebrated intensely and happily and often loudly.

Most Mexican families put up a Christmas tree at the beginning of Advent - a new custom that has come from Europe via the USA. The custom of building the largest possible crib is much older - in certain regions these cribs take up an entire room. 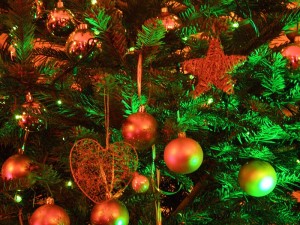 The “pastorelas”, highly amusing nativity scenes, in which a cheeky little devil also plays a central role, have a very Mexican tradition. At company parties, it is common to incorporate verses about the various colleagues in the game, and at public pastorelas it is the local or regional greats that are made fun of, so that the whole thing is almost reminiscent of a carnival event

On December 16, the “posadas” begin, which are celebrated in the family with friends and relatives or on the street with the neighbors or in the company. A posada is a hostel - and alternate chant depicts Mary and Joseph looking for a hostel, part of the celebrating group sings the part of Mary and Joseph asking for admission, another part of those who keep rejecting those looking for a hostel until they do finally find entrance.

The "piñata" is also important at the Posada celebration - especially for the children. 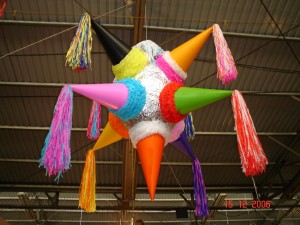 The classic piñata is a seven-pointed star. The core is a clay vessel filled with sweets and fruits. This core is covered with glossy paper and the stiff tips - also made of glossy paper - and hung on a taut line. Now each participant is allowed to try to hit the piñata with their eyes closed and equipped with a stick, while everyone pulls on the leash - so it is not that easy to strike a successful blow against evil . Because the seven points symbolize the seven main vices from which the deadly sins result: arrogance and arrogance, avarice and greed, lust and indulgence, anger and vindictiveness, gluttony and selfishness, envy and jealousy, indolence of mind and heart, i.e. ignorance. But if, with the help of everyone, the piñata finally breaks, the sweets will pour out ...

As a drink there is “ponche”, that is punch made from various fruits, including mostly the aromatic guava, which is sweetened with sugar cane and to which, if you want, you can also add a shot of rum. Pozole, a very strong soup made from corn, and tamales, rolls made from corn dough, wrapped in corn or banana leaves, filled with chicken or pork and a spicy sauce, all cooked over steam and, like pozole, an ancient Indian dish, are eaten with it .

When the ritual parts of the posada are over, the party continues (too loud music, of course!) Into the night. And since you celebrate in the company and with friends and neighbors, you can hardly get out of the party - but the posadas have their climax on December 24th, also a happy and loud festival that is celebrated in some villages in the tropics with dancing in the central square, the “parque”. But you have to wait until midnight to wait for the birth of Christ, because then it's only Christmas ... And until then, fish should be eaten mainly from December 16 (although salted and dried cod, mostly imported from the north or Europe, here is a traditional dish; the dried fish is placed in water that is changed over and over to desalinate it).

And the children have to be even more patient: Small gifts such as sweets are also available at Christmas, but the big and “real” gifts are brought by the Three Wise Men on January 6th at night….

A stressful time, especially since, of course, as elsewhere, the old year has to be said goodbye and the new year must be celebrated - with gunfire and fireworks! And with every stroke of the bell at twelve o'clock, a grape berry is eaten, so that each of the twelve months of the new year is a good month.

We wish you a Merry Christmas and a Happy New Year 2010!