What is the definition of physics

What is lightning made of and why does it light? It has only been around 250 years that people have known that lightning has something to do with electricity.

Physics, i.e. Füh-Sick, is a science. Anyone who deals with physics is a physicist. Physics is part of the natural sciences. Physicists try to describe the world with laws and formulas, which they test for correctness through experiments. We know, for example, that you can't suck water more than 10 meters high. Trees need water, but they are often much taller. How do trees get the water up?

Physics is about the forces in nature and how they affect substances. The laws of motion are also interesting for physicists. It all happens in space and time. Physicists research almost everything from the very largest to the smallest. So you are interested in the universe, the stars and galaxies, but also in the atoms and the things that make up atoms. Our technical progress would be inconceivable without physics.

What are physicists doing? 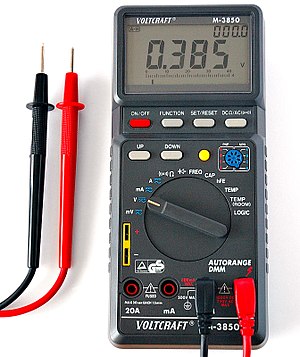 Physicists like to measure. With such a device you can measure a lot about electricity.

Almost everything we experience in everyday life has to do with physics. When something is loud or quiet, physicists speak of acoustics. What we see and how light works is called optics. Mechanics is about how objects move or how a car accelerates, for example. The action of a lever or the function of a cable winch are also part of the mechanics. Physicists are also interested in how heat is created and spread. That is part of thermodynamics.

A special phenomenon is gravity. It is also called gravity. It ensures that we stand on the ground and do not fly away. All objects that you let go of also fall on the floor. The earth attracts everything. This power is invisible, but it is there. Gravity also ensures that the earth orbits the sun and does not float away. This force acts on all bodies and over incredibly huge distances. It still works between the most distant stars in space.

There are other forces that cannot be seen. One example is electricity. It makes the lamp glow or the electric motor running. The magnetism ensures that the magnet sticks to the blackboard. However, this is only possible if there is a layer of iron hidden in the blackboard.

Another area of ​​physics describes what the smallest parts of matter are like. They are made up of atoms or molecules. You have to be very familiar with this if you want to develop a new material. But understanding radioactivity or atomic energy is also a branch of physics.

Physicists often have to calculate because they want to know something exactly and measure it. However, they do not necessarily calculate in their heads: they set up physical formulas that describe how calculations should be carried out. But then a computer does that. They also do a lot of experiments and measurements to check their assumptions.

How do physicists express themselves?

Physics is always about physical quantities. These can be measured precisely: the length of a path, the temperature of a liquid, the time taken to cover a distance, the speed of a vehicle and many others. In order to measure a quantity, physicists need not only numbers, but also units of measurement, for example meters, millimeters, liters or kilograms.

So that the physicists do not have to write long texts, they use a kind of their own abbreviation language. In doing so, they express relationships. The vocabulary of this language are the formula symbols and the unit symbols. Instead of the sentence “The length is two centimeters”, physics only writes l = 2 cm for short. The symbols stand for the physical quantities. With them, the physicist can write his findings very briefly as a formula.

What do physics have in common with other natural sciences?

Most other natural sciences also require a good knowledge of physics. This applies to biology, for example. The body of humans and other living beings is made up of substances. If you want to understand how substances change and how they interact, you need physics, but also chemistry. In biology, however, it is usually about living things, in physics it is not.

Chemistry takes care of the substances and the changes in substance properties when the molecules change. Molecules are compounds of atoms. In a chemical reaction, for example, hydrogen and oxygen become water. However, substances can also change when the atoms themselves change. This is another case for physics.