What is this "modern art" about, which many people doubt whether it is really art? Can this be a marketing gag? And why are John Chamberlain's metal sculptures so light?

My steps echo far through the intimidating rooms of the Pinakothek der Moderne in Munich. There are piles of steel scattered around me in the room. They reflect green light on their partially shiny surfaces. The woman who shows me around explains that these chunks of metal are actually works of art by John Chamberlain, who has spent his life shaping and welding body panels and bumpers. She explains how he reinterprets the material, removing it from its original purpose. She talks about how he carries out an art historical analysis with it, based on the time of Dürer, when the narrative illustration was no longer in the foreground, but the folds of the clothes of the figures became the central art form and its richest possible design Quality of a work. It is based on the commentary by modern sculptors on the historical development of art itself.
I take another close look at the works from this point of view. They are lumps of metal. 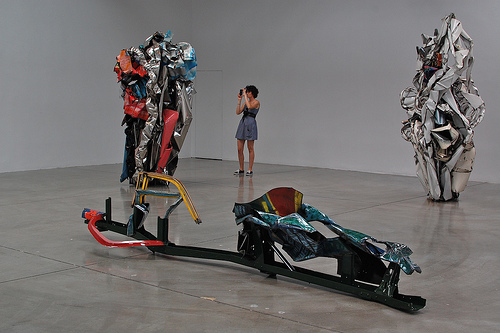 It has often occurred to me that museum guides often remind me of a sommelier in their job description, who tells guests in an overpriced restaurant what shades a certain wine has, how "deep" it is, what fruits or even hints of animal notes in its taste. Although I am of course aware that behind it there is the artistry of a person who has been involved in a certain area for a long time, and that wines actually differ, I never get rid of the feeling of being given a piece of a show I'm paying for. I feel a little lied to when someone stands across from me and tells something that, even with the best of will, I cannot deduce from the perceived reality.

Modern art is all too often exposed to this criticism. It has a bad rap with the general population for appearing so simple, so arbitrary. It seems like the real art is convincing others that it is actually art. So someone has stretched a few ropes through a room, and that is called “fine art” or “minimalism”. Poor Beuys struggles with the fact that his works of art are often destroyed by cleaning women who simply regard them as dirt and who, in their simplicity, remind us of the child from the fairy tale “The King's New Clothes”.
But even artists constantly encounter the problem that their own works in museums are impregnated by art connoisseurs with layers of meaning beyond layers of meaning that they themselves had never devised. It wasn't until much later that I happened to read in an interview that our Mr. Chamberlain, reformer of the bodywork, distanced himself from any meaning of his works and worked purely intuitively. For a while he even had to change materials because too many people interpreted meaning into cars.

So I let interpretations snow my way while I look appreciatively at metal. The tour continues. I am left undecided alone for a while. Corrugated metal. Drapery. Can be anything. But when I think of my beloved painters - Repin, Kramskoj - my naive, inartistic self cannot understand why they needed such obvious technical talent and now there are lumps of metal in the museum. Stand? It struck me that these structures shouldn't actually be standing at all. They look strangely tilted. But they are not held by anything, they are balanced. And you are light. Of course, in reality they are not light, they weigh several tons. But they look innocently like a crumpled sheet of paper. As if I could go and push one of them over with ease. Why? I am trying to analyze it. I go around the sculptures. I can't find where the illusion arises. The metal just looks like metal, even if it's confusing to look at its tangled surface. But if I take a few steps back it becomes crumpled paper again. I think again.

Here a person has managed to create an illusion. An illusion that is not noticeable at first glance. A shape that confuses the eye so much that you walk around the structure again. And suddenly I have a glimmer of understanding for this kind of art. Together with the other visitors I keep walking through the museum and most things bore us and then there is this one thing that catches our eye. We step closer, we look at it, we think, “I have no idea what this is supposed to tell me, but it would never have occurred to me to do it.” This thing arouses our curiosity and admiration at the same time. It makes us toddlers again, to whom so many objects in the world are alien and who therefore enjoy the great privilege of being able to marvel. This modern art, which we sometimes ridicule for its absurdity, now and then gives us nothing less than miracles. And if you just have the chance to experience this feeling with one or two exhibits, I would advise everyone at any time to pay a visit to one of the collection points for the bizarre things.

The weight of modern art

What is this "modern art" about, which many people doubt whether it is really art? Can this be a marketing gag? And why are John Chamberlain's metal sculptures so light?

An error has occurred. Please check your entries.