Energy of electric and magnetic fields

In the theory of electricity, the position-dependent vectors E., D., H and B. used to describe the fields.

E. is the electric field strength with the unit volts per meter (V m−1).

D. is the dielectric displacement with the unit ampsecond per square meter (A s m−2).

H is the magnetic field strength with the unit amperes per meter (A m−1).

B. is the magnetic induction with the unit Tesla [T] or V s m−2.

The energy density (energy per volume) is shown with the small letter w and has the unit V A s m−3 or J−3. This results in electrical, magnetic and electromagnetic field energy

A propagation of field energy is also possible without a carrier medium in empty space.

For those in a capacitor with the capacitance C. (Unit Farad [F] or A V−1 s) by applying a voltageU stored electrical field energy applies 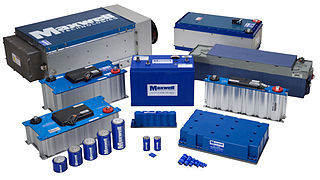 This field energy is often used for bicycle lighting when the dynamo is just taking a break. The supercapacitors shown in the picture on the right. supercapacitors) in contrast to ceramic, foil and electrolytic capacitors have an electrolyte as a conductive connection between the two electrodes. The high capacity results from two effects: firstly, storage of pure electrical energy through charge separation in a double layer and, secondly, electrochemical storage of electrical energy through charge exchange with the help of redox reactions, which generate a pseudocapacitance.

An energy density of around 3 Wh / kg can be calculated from these data using the above equation. The energy density for batteries is about an order of magnitude higher, but in terms of power density, capacitors with 3,000 W / kg are an order of magnitude better because the charging and discharging time of the accumulators is two orders of magnitude longer. For short-term processes such as starting and braking, supercapacitors can therefore be used in parallel with the accumulators. In China, trams run without overhead lines with the help of a supercapacitor weighing tons, which stores the braking energy and is charged at the stops within 30 seconds.

Those in a coil with the self-inductance L. (Unit V A−1 s or Henry [H]) through the flow of a stream

Technical applications for energy storage in magnetic fields fail because of the costs. Large superconducting magnets cooled with liquid helium for magnetic resonance tomography or spectroscopy use currents of around 200 A. With a self-inductance of the coil of 180 H, the considerably high magnetic field energy of around 1 kWh is obtained. But the magnet weighs a few hundred kilograms and costs around a million euros. Hopes for an economically justifiable storage of energy in magnetic fields are directed towards the development of cheap high-temperature superconductors.

Electromagnetic fields are not at all suitable for technical energy storage. More powerful transmitters for VHF radio have an output of 100 kW and distribute the transmission energy over an area of ​​around 100 km in diameter. The cell phone usually shines directly on the ear during a call. The head absorbs about a quarter of the electromagnetic field energy of the emitted 0.02 to 2 watts of transmission power.