What was used for video before VHS

Nostalgic tape salad: the invention of the VHS video recorder

Just a bit hip - today a bit of technology nostalgia: When the VHS video recorder was invented in 1976, it set a milestone for mass media use. For the next three decades it was an indispensable part of German households until the DVD made it a slow seller. The history of the video recorder actually began much earlier, in the 1950s.

On the wrong track on the road to success

The British television broadcaster BBC had its own VERA (Vision Electronic Recording Apparatus) as early as 1952. The head-high recorder worked with reels and magnetic tapes that were more than half a meter wide. The Loewe Opta Optacord 500 was the first home device to be presented to an amazed audience at the Berlin radio exhibition in 1961. The device was still so big that it was mounted on a mobile stand. It was by no means ready for series production and was only produced in very small numbers. 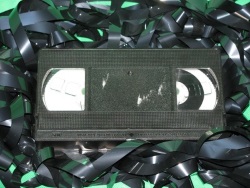 The leap in innovation from VERA to Optacord is due to the German engineer Eduard Schüller, the inventor of the so-called Helical tracking. Thanks to this new technology, the magnetic tape no longer had to be accelerated to five meters per second, but moved at an angle and at a high relative speed along the rotating video head. The medium-term consequence was ever narrower, shorter, more durable and more powerful magnetic tapes.

The invention of VHS prevails

In the 1970s, Japanese and European companies in particular emerged as inventors of new video technologies. Philips offered its "VCR recorders" since 1971, while Sony brought the "U-matic system" onto the market. In 1975 "Betamax" followed, also from Sony, and only in 1976 did the "Video Home System" (VHS) of the Japanese JVC group follow. In the coming years, VHS should oust all other solutions from the market or condemn them to a niche existence. But why?

From today's perspective, the football passion of the important US buyers was the main reason for the decisive advantage. Because the VHS recorder HR-3300 allowed slightly longer TV recordings than the competing systems - just long enough to completely record a football game. JVC never let itself be taken away from this marketing lead - probably thanks to a clever licensing policy. Very advanced video formats such as Betamax and Video 2000 only remained an extra role.

All of this has been history since 2016: the production of video recorders and VHS cassettes was discontinued due to a lack of demand. In the digital world, analog systems have no real chance of survival; the quiet hum of the coils has become an anachronism. Or is it not?

Back up data before it's too late

There are still millions of VHS tapes (and some other formats) on German shelves, filled with memories and almost irretrievable recordings. These sensitive treasures need to be looked after, because moisture gnaws at the magnetized chromium dioxide coating, magnetic fields from loudspeakers and drills delete data unnoticed, heat and cold put a strain on the recordings. No magnetic tape can withstand more than 20 (at most 35) years. The only thing that will help permanently is a data recovery. Instructions for this are available from the multimedia software provider Movavi.

We can be curious to see when we will look back on the days of the DVD with a little emotion and transfer all the data to the next but one generation of storage media.