Why are teenagers so moody

In most teenagers, mood swings decrease with age. This is the result of a Dutch long-term study that looked at the emotional stability of adolescents. Additionally, the study identified when the moodiness can indicate more severe problems. 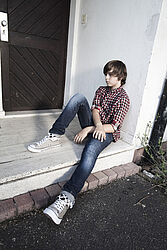 Adolescence is considered a phase of increased emotionality. Although teenage adolescents learn to regulate their emotions, little research has focused on the development of emotional stability in adolescents. The latest Dutch research has now found that the "mood swings" in adolescents gradually decrease as they get older.
Professor Hans M. Koot, developmental psychologist at the Free University of Amsterdam and at the EMGO Institute, said: "An important message for young people, parents and teachers is that temporary mood swings during early adolescence are actually normal and need not be a cause for concern."

The researchers are observing 474 Dutch adolescents between the ages of 13 and 18. 40% of these adolescents were prone to aggressive or delinquent behavior when they were 12 years old. With the help of Internet diaries, young people rated their daily mood for three weeks per school year. They indicated whether they were happy, sad, angry, afraid. They carried out this three-week documentation per school year for five years - that is, they recorded a total of 15 weeks, spread over five years. With the help of these daily assessments, the experts analyzed and calculated the mood fluctuations from day to day and determined whether development-related changes emerged over the course of the five years.

It was found that as teenagers went on, their moods became more stable. Girls suffered more fluctuations between happiness and sadness than boys in, but overall the rate of change at puberty was similar for both sexes.

The researchers suspect that adolescent emotions are no longer so changeable with increasing age, because teenagers have more experience with events that are new in early adolescence (such as falling in love for the first time, conflicts with parents about how to spend free time). And it's likely that adolescents will become more comfortable with their feelings over time.

Fear was the only feeling that didn't follow this pattern. Anxious episodes increased again even towards the end of puberty. This trend could be explained by the transition into adulthood, as adolescents face increasing responsibilities (leaving school, going to college, or starting work).

"As a rule, the strong mood swings eventually subside," says Dr. Dominique F. Maciejewski from the Free University of Amsterdam and the EMGO Institute and first author. "Adolescents who develop differently - especially adolescents who remain very moody or even get more moody as adolescence progresses, should be watched closely because previous studies have shown that extreme mood swings are associated with more emotional, behavioral and interpersonal problems are."