What is Garba dance

Hindus are celebrating one of their most important festivals these days: Navratri, the nine-day festival of the goddess Durga. It is celebrated all over India, but every region has its own customs.

Navratri (also Sharad Navrati) translated directly from Sanskrit means something like "nine nights". According to the Hindu lunar calendar, the festival is celebrated in autumn, this year from September 25th to October 3rd. During this time, Durga, one of the most important Hindu goddesses, is worshiped. For their admirers it is the highest festival of the year, it closes on the tenth day, Dussehra. 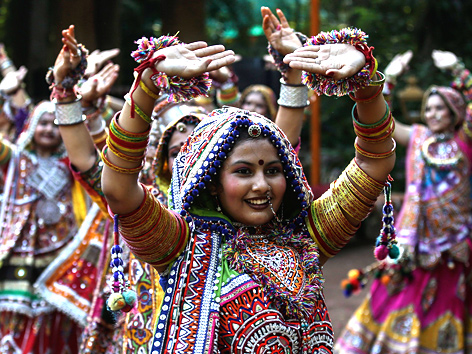 In Bengal and Nepal, Durgapuja, the Durga festival, is mainly celebrated for five days, as Christine Kundu, former Deputy Secretary General of the Hindu Religious Society in Austria (HRÖ), explains in an interview with religion.ORF.at. It is celebrated all over India, in some cases each of the nine days, each with its own name, has a specific focus. However, these are very different depending on the region, according to Kundu.

A jug as a symbol of femininity

In other parts of India, such as the northwestern state of Gujarat, it is customary to fast during the nine days of Navratri. The traditional Garba dances are performed here, including singing. In the course of these ritual dances, a jug is placed on a pile of earth, around which people dance. "The jug is a symbol of the goddess, the feminine," says Kundu. The conjuring up of fertility plays a big role in Navratri. 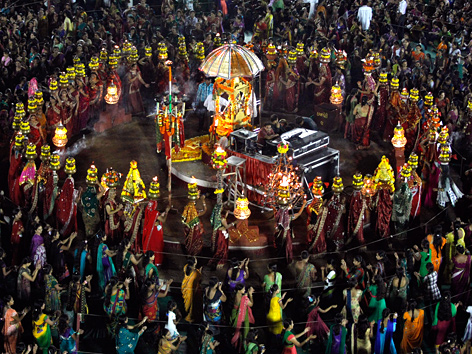 On the first day of Navratri, seeds are placed in the mound of earth, which germinate in the course of the following days and symbolize life and a new beginning. On the tenth day, the jar and the risen grains are brought into the temple. In the south of India there is also the custom (Golu or Kolu) to set up many small figures of gods on a wooden frame or on some kind of specially timbered staircase. They are circled and looked at, people visit each other during the festive season.

On the tenth day, the ritual fast that many Hindus impose on themselves during the holidays ends with a feast. This fasting can be a kind of detoxification of the usual menu or the reduction to a few foods, some simply avoid meat, eggs and other foods during the holidays.

Some also take fasting very seriously, including India's Prime Minister Narendra Modi: he has been fasting for 35 years during the nine-day Hindu festival Navratri in honor of the goddess Durga, as an Indian newspaper said a few days before the start of the Navratri festival. He only consumes water during this time and spends time doing yoga, meditation, and prayers. 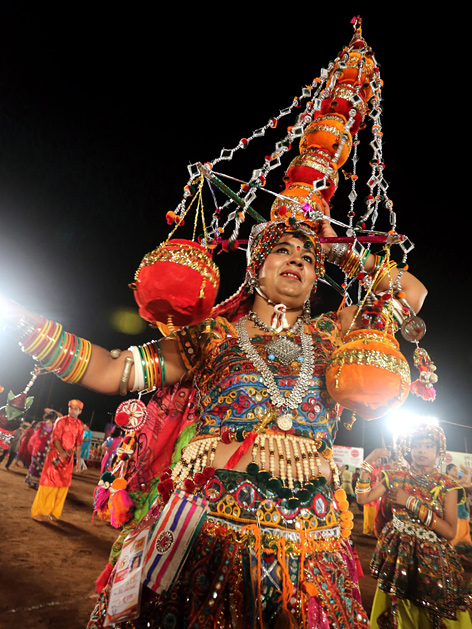 In Hinduism, Durga symbolizes the victory of good over evil in the form of the buffalo demon Mahisasur, who embodies the lower instincts of people (egoism, stupidity). The goddess is shown in pictures as a warrior, often riding a tiger, who carries weapons in her usually eight (it can also be fewer or more) hands. During her victorious battle against the demon and his army, according to mythology, Durga produced several other goddesses, including Kali, who fought alongside her against the enemy. 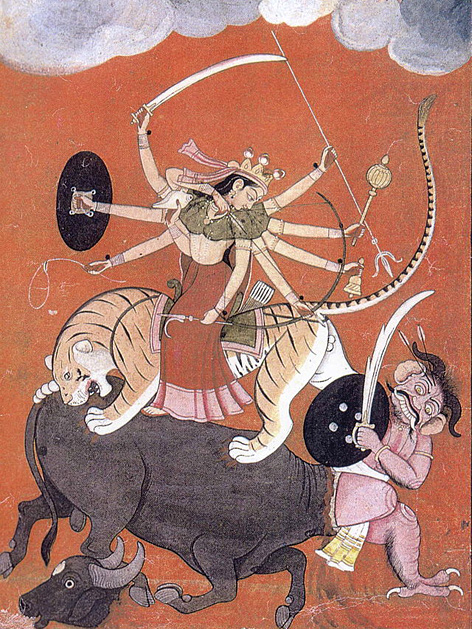 "These other goddesses represent manifestations of themselves, Kali, for example, is the manifestation of Durga's anger," continues Kundu. Kali also symbolizes death and destruction in Hinduism. Durga, in turn, represents a manifestation of Shakti, the feminine divine principle par excellence. 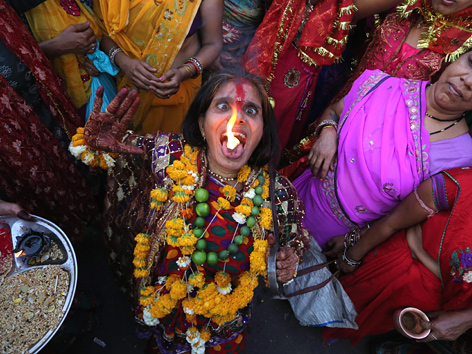 A woman burns camphor on her tongue as part of a ritual for the goddess Durga (Bhopal, India)

Durga's meaning in Hinduism can vary greatly depending on the faith: The Shivaites (followers of Shiva, who for them represents the manifestation of the Absolute) emphasize Durga's role as the wife of God Shiva. In Shaktism, on the other hand, a form of Hinduism that worships the mother goddess as the highest, Durga is considered “autonomous,” Kundu explains: no husband is assigned to her. "This is not a contradiction in everyday religious practice," says the Hinduism expert.