Which markets are there in the fitness industry?

The fitness market in the land of "unlimited possibilities"

The USA has a total of 41,370 fitness and health facilities in which 64.2 million members train (IHRSA’s 2020 Global Report of June 26, 2020). In the United States, 17% of the population of the total population is a member of a gym. This number has increased continuously over the past ten years. According to the latest IHRSA’s Global Report, over 20% of the population in 25 US states train in fitness studios (see Figure 1). New York tops the list with 29.7%, followed by California with 29.2%, Massachusetts with 28.6%, Connecticut with 28% and Illinois with 27.3%.

Record numbers in the past 10 years
The number of members in fitness clubs has increased from 50.2 to 64.2 million over the past ten years (The IHRSA US Health Club Industry Snapshot 2020). In the USA, the world association IHRSA, in collaboration with Sports Marketing Surveys, determined the frequency of 122 different sports activities through a large-scale study in which 18,000 people were interviewed. Here, too, fitness studios have seen an enormous increase in the past ten years. In 2019, each member went to the gym an average of 109.5 times to train. In 2010 the number was only 97.5 studio visits. This corresponds to an increase of 12%. Projected, US citizens completed 6.7 trillion training units in the studios, compared to just 4.6 trillion in 2010. The number of total workouts in 2019 increased by 45% compared to 2010. The phenomenon of so-called dual use can also be observed in the USA. This means that it is not uncommon in the US to be a member of two fitness centers. In addition to the membership in the fitness studio, many use the training offer of one of the countless boutique studios. The second use is not always mandatory through a membership for a certain period of time, as individual training units can be booked via aggregators such as Urban Sports Club, ClassPass or Gympass or 10 or 50 entry tickets are also possible as payment options. 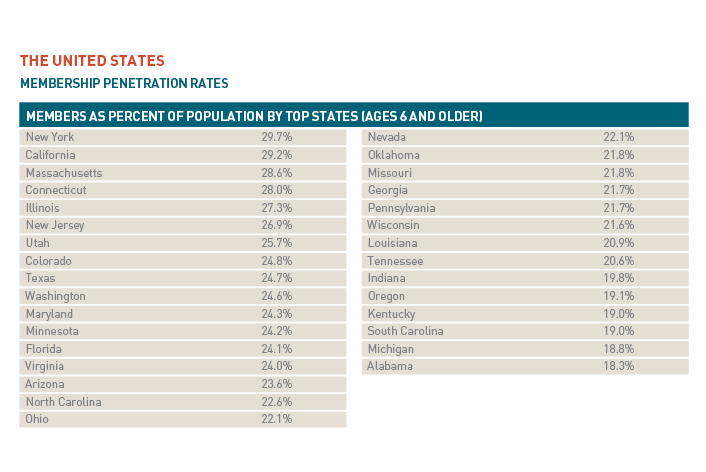 According to IHRSA's Global Report, over 20% of the population in 25 US states exercise in gyms

Enormous growth in the boutique studios
Boutique studios have seen tremendous growth in the US over the past seven years. According to a study by afsfitness.com, the number of these studios increased by 15% in 2017/2018. The appealing thing for the operators of the studios is that they are very lucrative. 70% of the studios surveyed are profitable (+ 4% compared to 2017), another 18% have already reached the break-even point.

According to afsfitness.com, the association for micro-systems, there are more than 100,000 boutique fitness providers such as Barry’s Boot Camp and Soul Cycle on the market. Soul Cycle alone, which is part of the Equinox fitness chain, has over 100 studios. There are a total of around 6,000 fitness facilities in Canada. According to IBIS World, the southeast region of the United States has the largest proportion of fitness and health studios in the world. Josh Leve, Managing Director of afsfitness.com: "Prior to the COVID-19 pandemic, the US gym market was by far the fastest in the global fitness industry." Xponential Fitness is a US boutique fitness franchisor that unites multiple brands . The multi-franchisor offers a total of eight different brands and types of training in over 1,500 facilities. The LifeFit Group has acquired the rights for the German market and two concepts, Pure Barre and Club Pilates, will be launched in Germany in 2021 and open studios. F45, a boutique franchise concept that started in Australia in 2013 and has now moved its headquarters to Los Angeles, now has nearly 2,000 franchise studios around the world. At the end of June, the company announced that it would be listed on the American stock exchange (NASDAQ stock exchange) and on the Italian stock exchange later in 2020.

What are the differences to Europe?
Studios in the USA are usually equipped with much more functional equipment. The systems have many devices. On the other hand, comparatively little value is placed on design and ambience. Exceptions are e.g. B. the studios of Equinox, Lifestyle or Midtown, which are located in the premium segment. Swimming pools are found more often in US clubs than in Germany, but the sauna areas are always separated by gender. A mixed wellness area is not permitted by law.

In the United States, many citizens have health insurance through their employers. Due to the reduced employee protection, employees are easier to terminate and the notice periods are significantly shorter than in Germany, for example. Larger companies insure their workforce themselves through so-called HMO (Health Management Organizations) and are therefore more motivated to ensure that employees stay fit and healthy in the long term. It is therefore common, even for smaller companies, to offer their own sports and fitness programs and to subsidize their employees' fitness studio memberships. Most clubs have an entry fee that is on average three times the monthly fee - there are usually no 12- or 24-month contracts for this. At the top of the price list in the US are the Equinox fitness clubs, where membership usually costs over USD 200 per month. 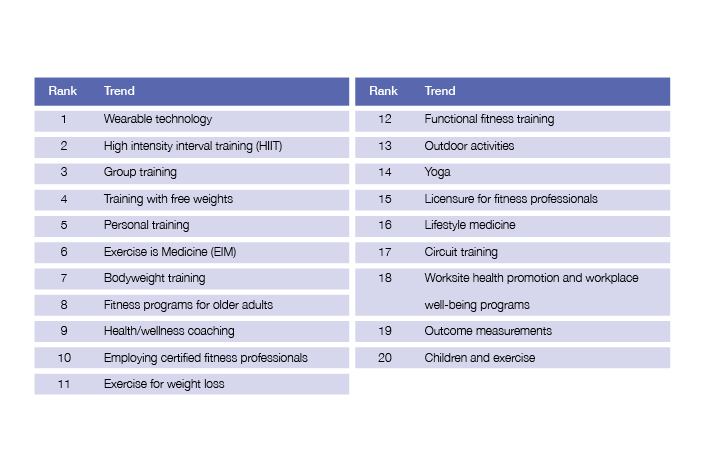 The American College of Sports Medicin (ACSM) and other institutions conduct an annual study of the most popular fitness trends. In addition to wearables at number 1, HIIT training, group fitness, training with free weights and personal training are very popular

The Canadian market is dominated by GoodLife Fitness. With around 440 locations and three brands, plus Fit4Less and Econofitness in Quebec, the company has around 1.7 million members. Over 5% of the Canadian population are members of this group of companies, which also operate clubs in New Zealand.

The trends of the US market
The American College of Sports Medicine (ACSM) and other institutions conduct an annual study of the most popular fitness trends in the United States. In addition to wearables at number 1, HIIT training, group fitness, training with free weights and personal training are very popular (see Figure 2). Boxing also achieved a top ranking. It also fits that some well-known former professional boxers such as George Foreman or Floyd Mayweather have opened fitness studios and offer the opening of further franchise clubs. The topic of regeneration is also becoming increasingly important.

Covid-19 crisis: the current situation in the USA
At the end of June, the gyms in 44 US states reopened. Since the number of virus infections in the USA is still above average in a global comparison and many people refuse to adhere to the applicable rules, such as social distancing, or refuse to wear mouth and nose protection, some states could do this again Order the closure of the fitness clubs. In the state of Arizona z. B. on June 29th, the gyms were closed again. The closings were ordered for an initial 30 days. Overall, Covid-19 has hit the fitness industry in North America very hard. Some fitness chains like Golds Gym had 33 of their own facilities in the USA and Steve Nash Fitness, with 15 locations in Vancouver, had to apply for bankruptcy protection.