How is Rahu doing in the 3rd house 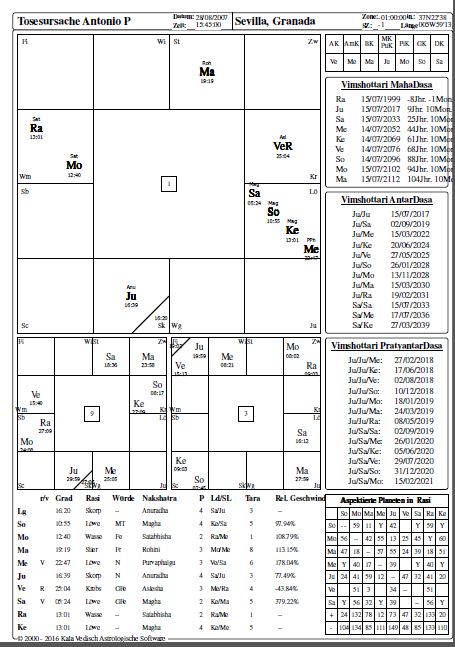 Hello
But you can see it. Direct your view to the sun and moon (are karakas for body and mind in Indian astrology.)
I'll insert the Indian horoscope. Read it clockwise. Ascendant house / with a line in it.
I'll give you some hints 10. House Sun is trapped by Saturn and Ketu, that is, threatened. Both culprits. Mercury in the 10th house see the box below with the number nine in it, Mars is there in Gemini at 23 degrees / Mercury at 22 degrees in the radix. Mercury also beset by evildoers. Further note: letters above planet SA / So / Ke is the Nakshatra Magha: ruling planet Ketu of Nakshatra, its meaning: it can change the status. It even represents death. Saturn connected with Ketu means a change of the situation. But if connected with Ketu and 12 house then it means death.
Next Mercury is connected to the 8th house in the radix because the 8th house ruler Mercury. See again in the box with the nine in it: Mercury is there in the 12th house. (Confirmation of Nakshtatra Magha, 8/12 house connection = death)
Next moon in the Nakshatra Shatabhishak ruling planet Rahu. Again a malefactor like moon is besieged by Rahu. And this Rahu is very close in conjunction with the moon!

Do I have to provide further information?
Another small one: The 10th house: All the planets in it throw an aspect to the 4th house where the moon / Rahu are in it. I don't want to enter any other aspects, no matter how, it comes down to the same thing.
Virtually all planets with connections to Ra / Ke Mars Saturn. A Jupiter who, by the way, is regarded as N equals neutral in the 1st house in the radix, can no longer do anything.
The whole thing takes place on the axis of house 4/7/10 in public, with the 4th house symbolizing the heart as well as the sun). Whereby the sun is in its own sign in Moolatrikona even better than the exaltation (does not exist in our astrology). So corresponds to the personality and its appearance in public. Another indication of the public almost all planets in Kendra houses (1,4,7,10). So here everything is right down to the last detail! It's not always like this !?
Greetings halberdier

ppa His natal chart would be interesting to see whether such a death is displayed in it. I suppose so anyway.

Jupiter gives hope, Saturn lets it happen. (Kelleher)
What we have done does not go on forever, everything ripens in its time and becomes fruit in its hour (Divyavana)
The horoscope represents the tree, the Nakshatra's positions the root, and the Navamshas represent the fruit (J.Sekhar)