What is linear motion 1

(An overview of all parameters can be found below.)

A uniform, straight movement is defined by a constant speed at which the direction does not change, which means that the same distances are covered at the same time intervals. The acceleration is zero here. This form of movement is described using the following formula:

This form of movement is characterized by a changing speed. The moving object becomes faster or slower, from which it can be concluded that the acceleration here is not equal to zero. The acceleration a is constant during a uniformly accelerated movement. This movement is defined with three laws: 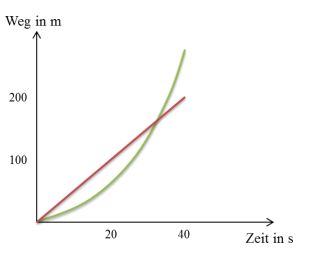 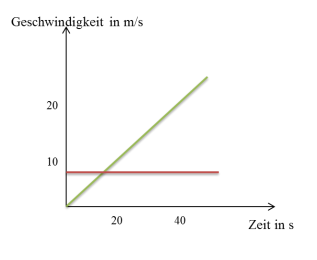 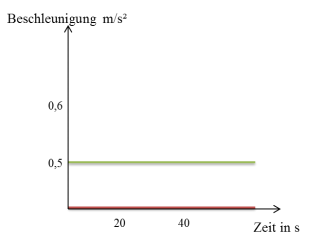 The movement of free fall happens exclusively through the influence of gravity, which has an acceleration of a = g = 9.81 m / s. Free fall is a uniformly accelerated movement, because the acceleration due to gravity is constant. If one neglects the friction of the air and buoyancy, the following equations are obtained: 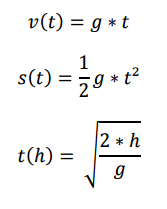 The direction of this movement changes in the direction of a circle. Since the velocity is a vector, the different directions of the velocity would cancel each other out. Therefore the uniform circular motion is defined with the constant amount of the speed. Or to put it simply: if you drive your car in a circle and set the cruise control to 50 km / h, your acceleration will be constant and will not change. But their direction is constantly changing.

Periodic movements are temporal changes in a system or a physical variable around a position of rest, in which every occurring state of movement is repeated approximately or exactly after a period and is defined as follows.

A body remains in a state of rest or uniform translation, as long as it is not forced to change its state by acting forces.

This means that under the conditions mentioned, the speed of a body is constant and can only be changed by the action of a force.

The change in movement is proportional to the action of the moving force and takes place in the direction of the straight line in which that force acts.

Forces always appear in pairs. If a body A exerts a force on another body B (actio), an equally large but opposing force from body B acts on body A (reaction).

The momentum is a directed quantity, the direction of which is parallel to the movement of a body and describes the mechanical state of movement of this body.

The law of conservation of momentum describes that all momentum within a closed system, which therefore does not interact with its environment, is constant. The impulses of two balls hitting against each other must therefore be the same before and after the impact.

Forces deform bodies, set them in motion or accelerate them. So the force is a performing work in which the energy of the body changes. The general equation of force is defined as follows:

There are different forms of forces, which are represented in the following equations: 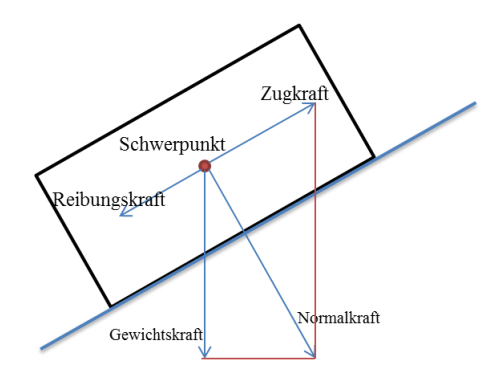 The impulse of force is defined as the temporal change in the momentum caused by an average force, which is defined as:

M.S. Center of mass, without units

The position of the body's center of gravity determines the equilibrium we are in. A distinction is made here:

The torque causes a body to rotate around an axis of rotation. It depends on the distance between the axis of rotation and the point of application of the force. Force times force arm is equal to load times load arm. The following definition describes the torque:

Example: Muscles act on joints, which - from a physical point of view - are the axes of rotation. These generate a torque with the application of force.

A static / rigid body has a resistance. If this body is set in a rotational movement by a force, a moment of inertia arises which is mainly dependent on the mass distribution of the body in relation to the axis of rotation.

The angular momentum is also known colloquially as twist or momentum. It indicates the direction and momentum of a turn around an axis and becomes larger:

It is defined with the following formula:

Through work, energy is transferred from one body to another. As a result, it can either be moved or deformed. As with strength, there are different forms of work, which are explained in more detail below.

Since it is not possible to generate or destroy energy, the energy in a closed system is always constant. Energy loss only occurs because the energy supplied can be converted (kinetic energy into thermal energy) or given off (in the form of heat radiation). The definition of a closed system plays a major role here and may only be named as such without the exchange of energy, information or substances and without any interaction with the environment.

The performance describes how much energy is converted in a certain period of time and is therefore dependent on the time. The work done or the energy supplied is inversely proportional to time. This means that the power will decrease over time at a constant energy.

A shock is defined as a change in momentum over time and is described by the following equation:

There are two types of impact:

Collisions involving two bodies whose centers of gravity move in a straight line are known as central impacts. 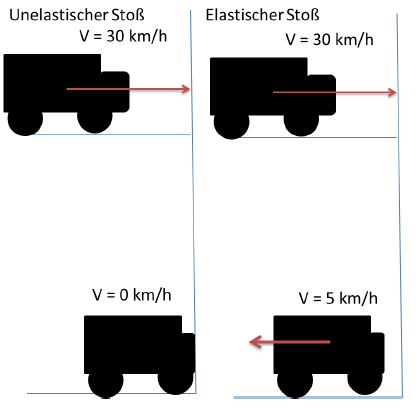 The Boyle-Marionette Law applies to ideal gases and states that these react indirectly proportionally with a change in volume when there is a change in pressure. For example, if you let half the volume out of a compressed air cylinder, then the pressure in the cylinder is only about half as high. It can also be described with the following formula:

Overview of the parameters

The solutions can be found below the references.

1. A body made of platinum is immersed in a mercury bath, a second made of aluminum in a water bath. Both are connected to one another with a thread via pulleys. In equilibrium, the platinum is completely immersed, while the aluminum body remains with half of its volume above the surface of the water.
Densities:
Platinum: 21.5 g / cm³
Mercury 13.6 g / cm³
Aluminum: 2.7 g / cm³
What is the value of the volume (aluminum body) / volume (platinum body) ratio?

2. A spring is stretched by 50 mm by an attached weight G1. An additional weight G2 with a mass of 30 g expands the spring by an additional 36 mm.
With what force does G1 pull on the spring?

3. Which of the following statements is / are wrong?

Romberg, Hinrichs: Do not panic about mechanics; Vieweg-Teubner-Verlag; 8th edition, 1999

Our articles are the result of the hard work of our editorial team and our specialist authors. Strict editorial specifications and an effective quality management system help to ensure the high relevance and validity of all content.Find out more about the editorial team, our authors and our work processes.

Blood is responsible for preventing the body from cooling down, sweat for preventing it from overheating. But how exactly does it work? To heat transport, tasks of Sto ... August 19, 2015 Lecturio more ...
Physics for doctors: amount of substance, volume, currents
A good understanding of physical processes in the human body is a prerequisite for a good physics exam. Learn all the relevant basics for ... August 13, 2015 Lecturio more ...
<?