Marketing is a waste of money

Search engine advertising is a waste of money

The eBay Research Labs have dealt with this question in a broad field study. To this end, a series of controlled SEA campaigns was started, advertisements were placed for individual regions and search engines over fixed periods of time, and the number of hits on organic and paid results was related to the expenditure.

46.5% of the advertising budget goes into SEA

eBay itself ranks 8th in the top 20 websites with the highest visibility on Google.com through paid search results, which indicates massive spending in this area. But eBay is also at the forefront when it comes to organic search engine visibility: 19th place. The results of the study ultimately moved the retailer to discontinue brand keyword advertising.

Brand keyword advertising is the most common form for most large companies. Company names themselves or in conjunction with other possible search entries such as “Zalando shoes” are linked to paid search ads. The benefit is doubted: Entering such search terms indicates that the user already knows exactly what he wants. In this case, information about a product on a specifically named website. The criticism here is that brand keyword advertising only accompanies the user on their last step to the website, which they would most likely have done without the ad.

On Google, paid ads are often placed directly above organic ones: 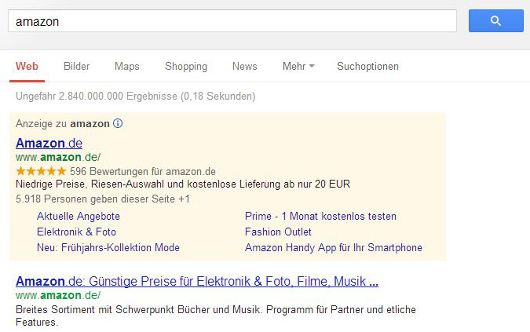 This begs the question of whether well-known brands really benefit from brand keyword advertising if they are on the front pages of search results on Google anyway. Every user who clicks on the paid one instead of the organic result generates avoidable costs through the CPC model.

For analysis, eBay launched brand keyword advertising on Yahoo! in March 2012. and MSN discontinued. Interesting: The organic results catch the lost traffic of the paid ads very quickly and thereby gain popularity themselves.

The following graphic shows the changes in traffic during the trial period: On the left, the period in which brand keyword advertising was discontinued on MSN. The clicks on Google served as a control value. The diagram on the right shows the period between hiring and resuming on Google.

The effect of branded keyword advertising is about 0. On eBay itself, paid search results are the trigger for increasing sales among users who only rarely use the platform (purchase of a maximum of 2 products per year). Paid ads have no measurable effect on customers who are already familiar with the sales platform.

The results of the study are put into perspective by the enormous brand awareness of eBay. For lesser-known websites with little content, search engine advertising is often the only way to effectively increase traffic. Theoretically, paid search ads also increase organic visibility, which, however, has a long-term effect that is difficult to measure.

You can find the study here.