Why is nylon 6 called that

The condensation reaction creates polycondensates with the elimination of by-products, usually water. Schematically, this reaction can be imagined as follows:

The polycondensation takes place in stages, that is, the chain can grow in different ways. Either monomers react to form longer chains or two chains of any length react without the reaction being terminated, since the monomers or chains must have at least two functional groups for this reaction (e.g. hydroxyl, carboxyl or amino groups).
Polycondensation combines several reactions that lead to different plastics. Some of these reactions and their products are explained below. 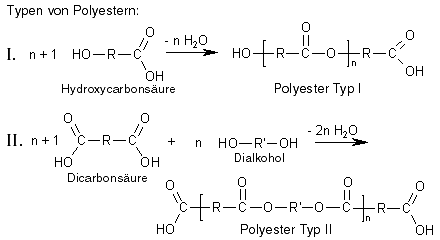 A special type of polyester is produced during the esterification of hydroxycarboxylic acid, since only one type of monomer is linked in this process. 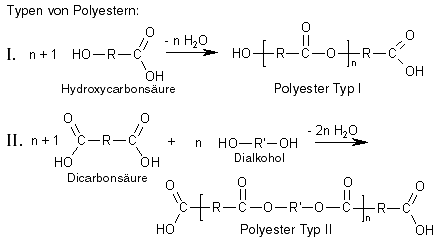 Monomers with only one or two or more functional groups can therefore be linked to form polyesters.

Polyamides are formed by a reaction of amino groups with carboxyl groups, whereby water is split off and the reacting molecules form an amide bond with one another. In order to obtain chain-like molecules, each of the starting materials must have at least two functional groups.
Two of the most important polyamides are nylon 6,6 and perlon (polyamide 6). The two substances differ in their monomers. Nylon 6,6 consists of a diamine (1,6-diaminohexane) and a dicarboxylic acid (hexanedioic acid). The digits 6, 6 indicate how many carbon atoms the respective monomer has.

Perlon, on the other hand, consists of only one monomer (6-aminohexanoic acid), which has both an amino group and a carboxyl group.

Due to the polarity of the amide bonds, intermolecular forces (hydrogen bonds) can be formed, which is why polyamide fibers are very stable. 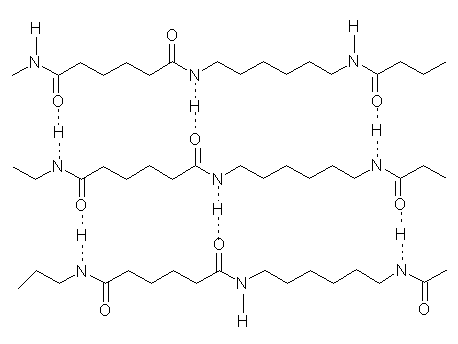 Phenoplasts are formed by the condensation station of phenols and aldehydes, three hydrogen atoms of the phenol are replaced by -CH2OH groups replaced. The subsequent splitting off of water results in precondensates which, depending on the desired result, are mixed with different condensation agents.

In an acidic environment, the precondensates react to form phenol alcohols, which are strongly interlinked, since the other hydroxyl groups with the H3O+ Ions react to water and thus the free carbon atoms can form further bonds between the monomers. Due to the higher degree of crosslinking, these plastics harden by themselves. On the other hand, when basic condensation agents are added, viscous resins form.
However, if the precondensates are heated under high pressure, three-dimensionally crosslinked molecules are formed with the elimination of formaldehyde molecules.
Phenoplasts belong to the group of thermosets due to the properties they are produced by them. 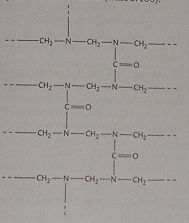 Cross-linking in thermosetting plastics
The production of aminoplasts is similar to that of phenoplasts, except that aldehydes and molecules with amino groups, such as urea, react with one another. Here too, the monomers require at least two functional groups in order to ensure that the reaction continues.
During the reaction, the molecule is methylated with amino groups and then linked to form a chain in a polycondensation reaction with other methylated molecules with elimination of water. The link is made via amide bonds which, like the peptide bonds, are based on an -N-CO- bond (see right picture).

The condensation reaction creates cross-links that develop into a thermoset plastic.

In most cases the basic structure of the atoms consists of carbon atoms, but in the case of silicones organic groups are attached to other silicon atoms from a silicon-oxygen chain, such as methyl groups.

Silicon reacts with two chloromethanes to form dichloromethylsilane, which splits off hydrogen chloride as a result of the reaction with water, and polydimethylsiloxane, i.e. silicone, is finally formed through further linkage to the newly formed hydroxyl groups. 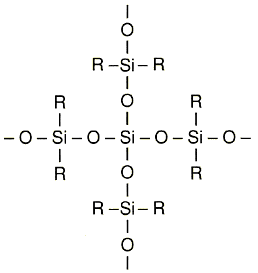 Condensation cross-linked silicone rubber
The chains can reach different lengths and can also network with one another, the properties of the silicone being determined by the structure. If there is a purely chain-like silicone, it is liquid and is referred to as silicone oil. As the chain length increases, so does the viscosity, and silicone greases are formed. If the chain molecules are only moderately crosslinked, elastic products - silicone rubber - result. If the cross-links between the molecules are stronger, it is silicone resins.
The networks can look like in the picture on the right, for example.