“The Legendary Whiskey” - this is how Crown Royal describes itself. In today's tasting we want to find out whether Canadian whiskey is really legendary or whether it is simply splurged with golden pomp. Follow us on the trail of the Crown Royal Whiskey to Canada!

Why is hardly anyone in this country talking about Canadian whiskey? One thing is clear: Canadian whiskey has long been overshadowed by its famous relatives further south. Bourbon and Rye from Kentucky, Tennessee and other US states determine the picture. When it comes to Canada, many still think of maple syrup and lumberjacks first, but not whiskey.

That has changed a bit since “Whiskey Pope” Jim Murray named a Canadian whiskey the best in the world for a change in 2016: The Crown Royal Northern Harvest Rye. Now Murray is known for conjuring up some obscure bottling out of his hat and awarding it every year. If things go well, not only whiskey magazines but also the major media write about the unusual decision and do great PR for its annually updated “Whiskey Bible”, a handbook with its whiskey reviews.

So you shouldn't give too much to the “World Whiskey of the Year” award. Unless, of course, you've tasted other whiskeys that Jim Murray loved and that you also loved. Then you happen to have the same whiskey taste as him and you can be happy, because Murray will certainly continue to conjure up some supposed or maybe real pearls out of his hat every year.

What is Canadian whiskey?

Canadian whiskey is spelled differently from American whiskey with ‘y’ and is based on the Scottish spelling (here we explain the differences between whiskey and whiskey). It is a type of whiskey that is a little less strictly regulated than Scotch or Bourbon.

The most important facts in brief:Canadian whiskey must be made in Canada and stored in wooden casks for at least three years. These are “multi-grain spirits”. First, a single whiskey is distilled from each type of grain (e.g. corn, rye, barley, oats, wheat ...) are allowed. Then a blend is created from the individual distillates. This is a clear difference to American bourbons, in which the grain is mixed before it is distilled (the so-called mash bill).

Other deviations relate to storage and additives: Unlike American bourbon whiskey, Canadian whiskey can also be stored in used barrels; the addition of caramel color and other spirits for flavoring is permitted. Even if the limit is probably not always exhausted in practice: By law, distillers are allowed to add up to 9.09% other “aged spirits” that are not whiskey to their Canadian whiskey.

The latter clause in particular has certainly contributed to the somewhat dubious reputation of Canadian whiskey among connoisseurs. Why should I drink a colored and flavored Canadian whiskey when I can get an uncoloured natural-flavored bourbon for the same price? On the other hand, the additional freedom allows Canadian distillers to make their whiskeys more interesting by adding bourbon, scotch or sherry, for example.

Crown Royal is the flagship for Canadian whiskey

There really is a royal story behind the Crown Royal brand: In 1939, King George VI and Queen Elisabeth were the first British monarchs to visit Canada. A Canadian distillery founder sensed his chance and created a whiskey that was to celebrate the occasion worthily and serve as a generous gift for the monarchs. Allegedly 600 blends were tried before the final product was completed in a glass decanter and a purple sack with gold embroidery on it. The final whiskey was a soft and mild blend of around 50 different whiskeys and was christened Crown Royal.

Purple cloth bag, golden cord - that's exactly what we hold in our hands when we open the Crown Royal's somewhat cheap-looking cardboard box. Inside is a bottle that looks quite old-fashioned and is decorated with a wide variety of shiny gold elements. A golden screw cap made of plastic puts the crown on the lack of taste. A little more royal restraint in design would suit the Crown Royal. On the other hand, you also have to see the price: 0.7 liters of Crown Royal cost less than 20 euros. A bottle with the aesthetics of a Hibiki 17 years old is probably simply not in it. We have already poured and are looking forward to the content.

Our tasting of the Crown Royal Canadian Whiskey

How does it smell

The Crown Royal from Canada opens the audience with a soft, sweet and young fragrance. The sweet aromas of vanilla give way to a subtle nuttiness. We smell peanuts, but also marzipan. Likewise grain and a fine acidity that is reminiscent of grapes. The latter note makes us think of rum raisins. In the finish, a few sawdust and a bit of grated lemon peel that tickles the nose with a finely sour and bitter tickle.

How does it taste

The mildness from the nose continues in the mouth immediately. We taste vanilla (“like one of those 19-cent vanilla puddings from the refrigerator”) and fresh apples. Grain notes are present in the middle section, and nutty notes also resonate. Otherwise, unfortunately, not much happens. The finish is there quickly, which is noticeable through a slightly alcoholic bitterness. The wood can be tasted for a very short time, then the Canadian has disappeared from our mouths and our thoughts.

Crown Royal Canadian Whiskey
The Crown Royal is reminiscent of many Irish whiskey: soft, sweet and inconspicuous, it doesn't try to offend anywhere, but doesn't really leave a lasting impression. If you are looking for a mild whiskey for little money as a beginner, you shouldn't go wrong with this Canadian. Everyone else is better off choosing a bottling with more character and depth. 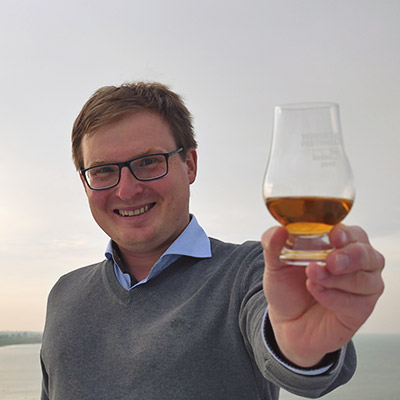 ForMalt whiskey I am always looking for new taste experiences. A good whiskey challenges me in tasting, it surprises me with exciting aromas. I especially like well-told stories about distilleries, their founders and the makers of the malts - and I like to tell which ones myself.

Learn more about these topics: