Can the cloud cover help the jets escape the radar?

You complete the missions in "Ace Combat 7: Skies Unknown" in the role of the pilot with the code name Trigger in a linear sequence. As in the previous versions, the 15 to 25-minute missions consist of several scripted phases. In the first one, for example, there is an attack by enemy jets, all of which you have to shoot down within a certain time limit. In phase 2, a rearguard in the form of bombers appears, which you have to neutralize before reaching the destination - you can optionally collect additional points by shooting down the jets that give the bombers escort. The time limit, which sometimes puts you under more, sometimes less pressure, sometimes also applies to shooting down a certain number of enemy units in the air or on the ground. There you have to collect a minimum of points before the timer runs out, with each type of enemy being shot down with a different yield.

But by far not only normal dogfights await you. In a mission, for example, you have to bring a so-called space elevator that has got into enemy hands back under your control. Before the attack on the defensive facilities on the ground begins at the lift itself, you first have to meander through the areas not covered by the radar. Elsewhere you have to destroy a number of ground stations. They are all above a thick cloud cover on hills. However, you shouldn't move too long above the veil of clouds, since, unlike the usual rocket fire, you won't be able to escape so easily by evasive maneuvers or the firing of decoys. In another assignment, you are escorting an allied transport aircraft, switching off rocket towers on the ground and repelling further attacks from the air. It becomes particularly exciting when you first meet Mihaly, whom you follow through the middle of an area with high, pointed rocks. To make matters worse, the formations are partly surrounded by thick fog and storm clouds. If you are struck by lightning, which is unfortunately hardly avoidable, you temporarily suspend your missile warning function, your radar and also your target support. This adds tension, but sometimes creates unnecessary problems related to other elements of the game mechanics. 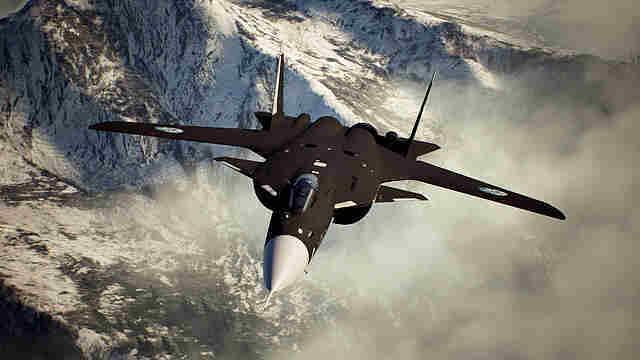