What will Gordon Ramsay's MasterClass teach us?

Playing basketball like Stephen Curry, singing like Christina Aguilera or designing fashion like Diane von Fürstenberg? The e-learning website masterclass.com promises to teach you exactly these skills. World-famous stars from a wide variety of areas give tips and instructions in online video courses that are subject to a fee and costly produced. OMR explains the business model, how the masterclass maker wins the prominent speakers and how good the courses really are.

The fashion billionaire Diane von Fürstenberg sits in her perfectly lit loft and strokes henna-colored curls from her face. Her bangles jingle softly. A cream-colored couch with zebra print pillows and a huge self-portrait on the wall adorn the background. “Instagram gives your brand a visible voice,” she says. “You can use this voice for your brand as often as you want and wherever you want - it's fun. Take this chance. Develop an online personality. This is about visual discipline, day after day, post after post. Here you can show your creativity. It is your business card and your window to the world; use it. The more authentic you stay with it, the better. "

In 16 lessons, the 71-year-old entrepreneur teaches on masterclass.com how to build a fashion brand - through product development, market research, brand DNA, brand loyalty, how to network with your customers, how to properly use social media - especially Instagram and how to deal with failure. Later in the course, two young fashion designers, Catherine and Danny, present their first portfolios, sometimes sobbing with excitement and receiving a portfolio review from their famous teacher in front of the camera.

Diane von Fürstenberg is one of over 30 mostly American superstars who pass on their skills in online courses on masterclass.com. For 100 euros you buy lifelong access to a class. For 210 euros, customers can subscribe to all classes for one year, download course books and exchange ideas with course participants around the world. A young handbag designer from Jakarta ponders in the “student community” of the Fürstenberg course, for example, about her entrepreneurial intentions and introduces her “Da’poza” brand to classmates. 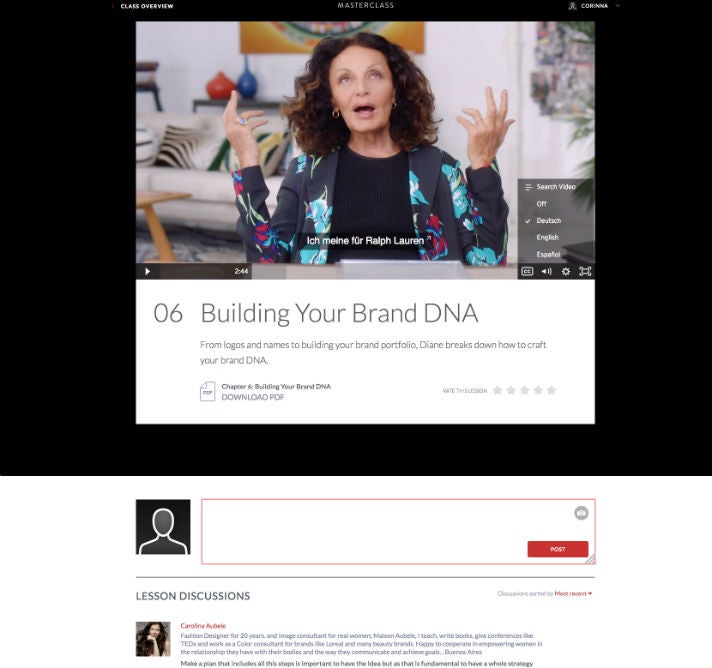 Many students ask questions of the teachers in Q&A sessions. And the concept apparently works: Direct interaction with the teachers is not possible. But their lessons are inspiring, fun, and well made; to the German subtitles, which are helpful for von Fürstenberg's tailoring terms such as "seams", "hems" and "duchesse satin".

The masterclass.com founder is an investment professional

What does the company do better than other e-learning startups? The CEO and co-founder of Masterclass, 35-year-old David Rogier, is a full-time professional founder: he started and sold his first company, a search engine, as a student. Then he opened supermarkets in the USA for the British retailer Tesco. After completing his Stanford MBA, he worked for a VC as an investor. And when he wanted to start something himself, but still didn't know exactly what, his ex-boss gave him half a million dollars and let him do it.

Rogier got into the digital learning market and often shares why. His grandmother fled the Nazis from Poland in 1939, emigrated to the USA and applied unsuccessfully to 50 universities before she was finally taken to one, studied medicine and became a pediatrician. She told him: Education is something that no one can take away from you.

The same fees for all stars

Rogier talks a lot about Masterclass' marketing strategies; for example through pricing on both the supply and the demand side. To get the stars to teach a masterclass, Rogier first hired an entertainment lawyer. He explained what the agents of the superstars supposedly really wanted: not the highest possible fee, but a fair deal. And that's why Masterclass set the same fee for all teachers before the launch in May 2015, which consists of an advance payment and a share of the turnover. 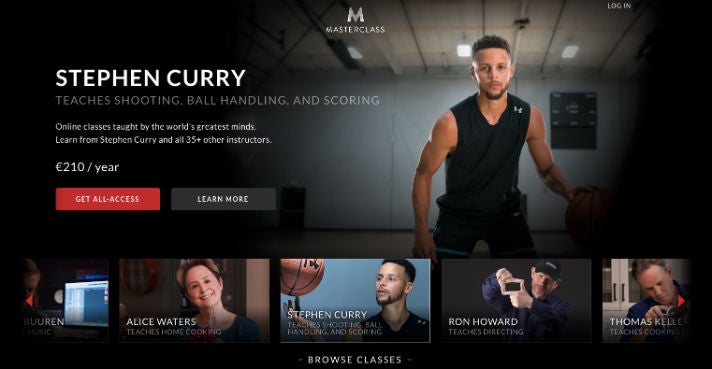 The masterclass.com homepage with NBA star Stephen Curry as a testimonial.

Although David Rogier does not publicly give exact numbers, according to industry services, the celebrities receive 100,000 US dollars as a fee and an additional 30 percent of sales in their class. In addition, according to Rogier, they retain control over their course content, course types, press work and marketing appearances. The stars really want to teach and pass on their knowledge, ”said Rogier in an interview with podcaster Natha Latka. "They could earn a lot of money more easily in other ways."

The world-famous teachers are now recruiting each other

The first three teachers were actor Dustin Hoffman, bestselling author James Patterson and tennis player Serena Williams. Rogier, who grew up in Los Angeles, is silent about how he lured the first superstars. "Honestly, we were persistent, called a lot of people, had good advisors, a few connections and luck," he says in an early interview. He also knew Dustin Hoffman's daughter.

What is certain is that masterclass.com was successful right from the start. Since then, the teachers have even been recruiting each other. When the British star and television chef Gordon Ramsay had finished his courses, he sent Rogier a thank you email and immediately put his friend David in CC, who now urgently wanted to appear in such an e-learning course - to Rogier's delight, that was David Beckham been. The famous teachers are now marketing their courses themselves, talking about them in interviews and talk shows, tweeting and posting their course trailers.

According to the startup, pricing on the demand side, among the students, was also thoroughly tackled. Rogier: “We tested so much.” Because the launch costs for the first courses were so high, they couldn't have made any mistakes. Which teachers should you choose? What should they teach, what learning content should they offer? Masterclass have integrated data analysis into the creation process of the class content and work like two companies: on the one hand like a Silicon Valley start-up with its quantitative analyzes, on the other hand like a Hollywood dream factory that sells “democratic access to genius” in an entertaining way I want everyone to learn from the best.

According to Rogier, the biggest difference between a tech company and a content company is how they achieve product quality. Tech startups tried to work as leanly as possible, acted according to the motto "move fast and break things" and improved their products after the launch step by step depending on the market reaction. For a creative production company in the film world that values ​​its brand, such an approach is too risky. She produces a film every two years without a second chance to improve the product. When the film starts, everything has to be perfect. Masterclass work like a film production company, but according to digital premises: "We're pushing tech on it," says David Rogier.

Masterclass relies on user interviews, surveys and ongoing data analyzes, has set up a lot of test pages in advance and tried test advertising on social media. On the first day after the launch of masterclass.com in May 2015, he cried with disappointment at the sales, Rogier told an investor. He had hoped for much higher sales, because he had assumed that the number of new customers was falling every day.

His head of marketing, who previously headed the paid advertising department at Netflix, was delighted. “Did you see how low the customer acquisition costs are for all courses? It's going to be a gigantic business! ”He called to Rogier. The company would have spent less than $ 100,000 on paid ads on launch day. All channels worked well - and sales remained stable in the days after the launch. An obvious reason for the success of masterclass.com with paid advertising: The prominent teachers serve as the driving force, increase interest and drive up performance and engagement. A Facebook ad with a short clip by Stephen Curry that promises to improve “shooting, ball-handling and scoring” had almost five million views, 6,500 shares and 29,000 likes at the beginning of the year. The success of such ads is likely to have contributed to the growth of the Facebook page since the beginning (currently almost two million fans). 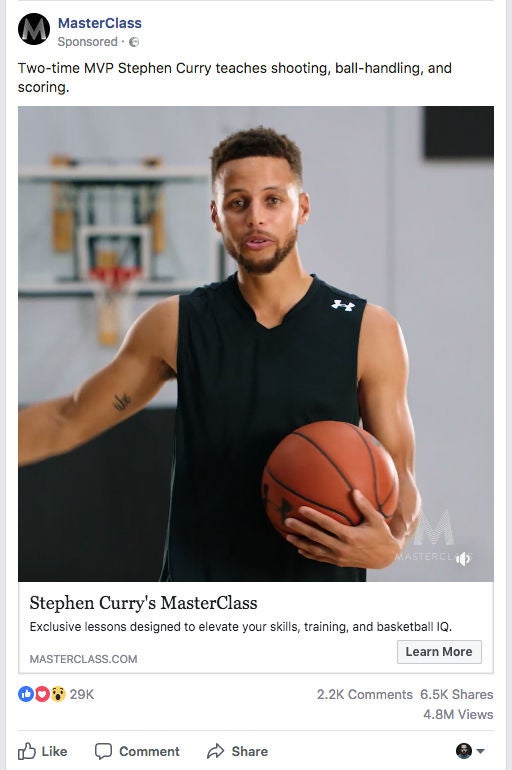 Is masterclass.com planning an exit?

“Masterclass.com is the first mover in the premium online course market, and I want to defend that position,” says Rogier. The company has raised a total of 56 million US dollars in three investment rounds so far. It has just launched an iOS app and digital gift certificates. The company does not publish customer numbers, nor does it publish sales, profits and losses. Masterclass also pays attention to its good reputation: The company silently removed the critically acclaimed acting courses from Dustin Hoffman and Kevin Spacey from the program after long-ago allegations of harassment by the two became known. David Rogier envisions that one day, when online and offline learning have long since merged, masterclass.com will stand for inspirational education. When asked if he would sell the company for US $ 300 million, he just says: "No way".