Beta for the new MMORPG Sword of Legends starts, but there are problems (update)

Sword Of Legends Online, the new MMORPG from Asia, started its first closed beta today, May 21st. After it ran without any major problems at first, there are now a few problems. The situation at a glance.

What's going on in Swords of Legends right now? After the beta for the MMORPG started as scheduled at 2:00 p.m., there now seem to be the first problems with the servers. More and more players report that they keep being thrown out of the game.

We'll keep you updated in this article.

Updates from the server status

Update May 23, 5:15 p.m .: After almost 24 hours, which ran almost without any problems, there is now emergency maintenance in Europe. At 5:00 p.m., the servers were taken offline for this. It is currently not known when they will go back online.

Update 6:05 p.m.: In a new tweet, maintenance was officially ended. But there should still be problems:

Update 5:00 p.m .: The start of the developers' official livestream has been postponed to 6:00 p.m. our time in order to fully focus on the server problems (via Twitter).

Update 4:35 p.m .: The developers have now announced emergency maintenance. It should start at 4:45 p.m. It is not known when the servers will go online again:

Update 4:00 p.m.: Anyone who is currently logging in will receive a notification that the next beta events will take place from May 21st. until May 25th and from 1.6. until June 8th occur. So the servers are completely down right now.

Update 3:27 p.m .: A statement from the developers just came on Twitter. They are working on the problems with the maintenance and authentication messages when players fly off the servers.

They apologize to the players for the delay and ask for their patience.

Update 3:24 p.m .: Other players report problems. They are apparently being kicked by the servers again and again. The developers are still investigating the problem, but we don't know yet.

What do the developers say about it? The official Twitter account has already contacted me and says that they would look at the problem. As of now (14:53) there is no further information from the developer.

What could that mean? Perhaps the servers are a bit overloaded with the first rush of players. At least that wouldn't be unusual. According to the developers, the servers are not offline.

From the comments on Twitter it appears that the problems occur mainly on the EU servers.

How can I participate in the beta? All players who have a key can take part. Keys have already been raffled off by Gameforge and some content creators. In addition, everyone who has pre-ordered Swords of Legends is eligible to play. SOLO can be played via the Gameforge Client, Steam and Epic and should appear in 2021.

What do I have to do to redeem the beta key? First you need the Gameforge client, which you can download from the official site. There you then log in and click on the button “Redeem voucher”.

We will keep you up to date in this article about the status of the server. Until then you will find the most important information about the beta of Swords of Legends here: Everything about the upcoming beta - start, download, beta keys 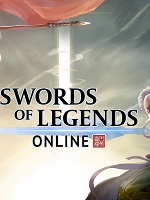 Swords of Legends Online is an MMORPG from China that was published there in 2017. It puts a lot of focus on quests and a story around a ...