What is the electronegativity of carbon

Before we deal with the subject of electronegativity, we have to look back one more time, to the subject of "atomic bonding". Atoms hold together in atomic bonds because the atomic nuclei use electron pairs and these are attracted by both atomic nuclei. As a result, the atoms reach the noble gas state, which is the goal of almost all reactions. 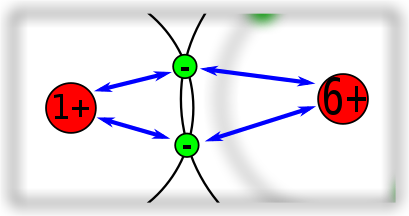 With this bond between a hydrogen and an oxygen atom, the difference is even greater than before with hydrogen compared to carbon. It is therefore to be expected that the binding electrons between hydrogen and oxygen atoms will be more attracted to the oxygen. Carbon and oxygen atoms have the same number of shells, but oxygen has more protons in the core.

How can one understand that the electrons are more attracted to the oxygen atom than to the hydrogen atom? It is not that easy, because you have to remember that the electrons are not - as can be seen in the picture - in a fixed place. They have to be in motion, otherwise they would be drawn to the atomic nucleus. The "position" of an electron can be thought of as a probability of its location.

At the beginning of the simulation, the atoms are not yet connected to each other. After the start, the bond is formed and the blue area is concentrated between the two atomic nuclei (the crosses at A and B).

The following simulation, which you can also operate yourself, shows moving electrons if you use the setting "Electron distribution view" select. In addition, the red "cloud" is changed if you have selected different atoms. Even if the electrons move too fast to be able to follow them exactly, one recognizes that - depending on the atom selected - they are more or less near one or the other atom.

So far we have only mentioned that different atoms attract the binding electrons to different degrees. This attraction depends on two factors:

With the help of the information in the periodic table, one can say exactly how many protons the atomic nucleus has and how many shells, but it is not so easy to estimate how strong this has in each case. The diagram with the atomic radii also shows that the atomic radius changes within a period, as the greater number of protons attracts the electrons more strongly.

Fortunately, this assessment was made for us and quantified in the form of a number that indicates exactly how strong the attraction to the binding electrons is.