The popularity of Facebook has less of an impact today

WhatsApp and Snapchat are equally popular with all young people, Instagram is the most fascinating for 14 to 17-year-olds. And: Compared to the previous year, the popularity of Netflix has more than doubled, that of Facebook more than halved.

Social media under the microscope: WhatsApp is at the forefront when it comes to communicative use of the Internet and its services. 95 percent of young people between the ages of twelve and 19 in Germany regularly exchange information about it - on average they receive 36 messages a day. In second place is Instagram (67 percent), followed by Snapchat with 54 percent regular users. Facebook (15 percent) is only used regularly by a few young people.

These are some of the results of the JIM (Youth, Information, Media) study 2018. For this purpose, 1,200 young people between the ages of twelve and 19 throughout Germany were interviewed by telephone from May to August 2018. The series of studies is published by the Media Education Research Association Southwest (mpfs).

It is hardly surprising that young people today grow up in households with a wide range of media. 99 percent of those surveyed have a smartphone, 98 percent a computer / laptop and 98 percent also have Internet access. Wearables such as smartwatches or fitness wristbands as well as internet radios are available in a good every fifth family. Digital voice assistants such as Alexa can be used at home by 14 percent of 12 to 19 year olds.

There are two significant changes compared to the previous year: The popularity of Netflix has more than doubled (2017: eight percent, 2018: 18 percent), that of Facebook more than halved when it was spontaneously mentioned (2017: 15 percent, 2018: six percent). 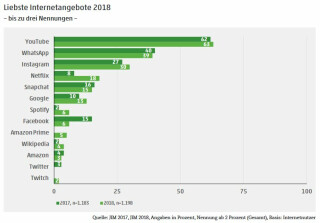 3. The most important apps

Also exciting: platforms for the use of moving images are clearly losing importance. Most of the young people use the internet on their smartphones.

WhatsApp is the most important offer on mobile phones and is mentioned by 87 percent of 12 to 19-year-olds, followed by Instagram (48 percent) by a large margin. When asked about the most important apps, YouTube comes in third and is only mentioned by 37 percent. It is followed by Snapchat (31 percent), far behind Spotify (ten percent), Facebook, Google (six percent each) and Netflix (five percent). 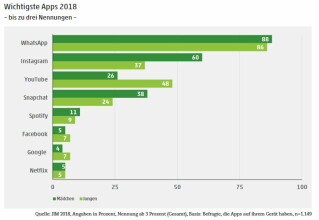 What the favorite Internet offers are and what applications are actually used in everyday life are two different things. Here the results are as follows: 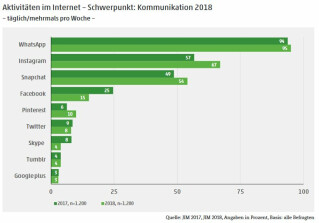