How was the phone used

141 years ago: Bell made the first phone call

141 years ago today, Alexander Graham Bell made the world's first phone call. The sentences “Watson, come here. I need you. ”Are very unspectacular, but in 1876 they marked the beginning of a technology that we don't want to be without today.

Telephoning is part of everyday life for us. 141 years ago today, the telephone conversation that Alexander Graham Bell had with his assistant Watson was a real sensation. Bell developed a telephone set with which it was possible to transmit speech. However, the invention is not entirely his own responsibility: For the development of the telephone, Bell drew on the results of the inventor Antonio Meucci and the German Philipp Reis, who had already presented his telephone in 1961. Rice's development was less suitable for the transmission of speech, but more for the transmission of music. Bell developed its own device based on both inventions and applied for a patent without having built the device. It was only later that the mechanic Thomas Watson built Bell's telephone, which they tested on March 10, 1876. While Watson put his ear to the receiver in the next room, Bell said into the phone: “Watson come here. I need you ”.

Not out of competition 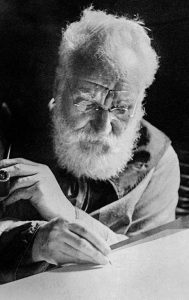 The first phone looks nothing like the corded phone that we are familiar with. It consisted of a can filled with acid. Inside was a wire that was attached to the can's sealing disc. Outside the box, another wire connected the transmitter phone to the receiver. Above the can was a funnel into which one could speak - or rather shout - into it. The system was based on vibrations. As soon as the sound waves vibrated the sealing disk and the wire, the current flow through the wire and the acid changed. The sound waves were converted into fluctuations in electricity. This conversion was reversed for the recipient of the message. The fluctuations were converted back into sound waves and thus into sound via a membrane.

In addition to Bell, other inventors, such as Thomas Edison and Elisha Gray, also worked on a telephone. Both also filed a patent. A total of four further patent applications had been submitted to the Patent Office. However, the responsible official decided in favor of Bell, who tried to sell the device after the successful test. To this end, the Bell Telephone Company was founded in 1877, which later became the American Telephone and Telegraph Company, now known as AT&T as one of the world's largest telecommunications groups.

Inventor through and through? 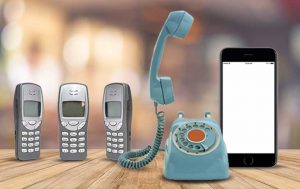 A world without telephones is unimaginable today.

Bell was born on March 3, 1847 in Edinburgh, Scotland. After studying the physiology and anatomy of the human voice, he worked as a speech therapist in London and tried to teach deaf people to speak. In 1870 he emigrated with his parents to Canada, where he began to teach at Boston University and studied the recording of sound waves. With his experiments he laid the foundation stone for the telephone more by chance. His original intention was to record sound waves in order to make deaf people visible what the other person said. He was unsuccessful in this area.