Who was Moses' sister

After leaving Egypt, Mirjam leads the women's dance of joy as a prophetess. She is one of the three leading figures from the central liberation story of the people of Israel - the dancing prophetess. 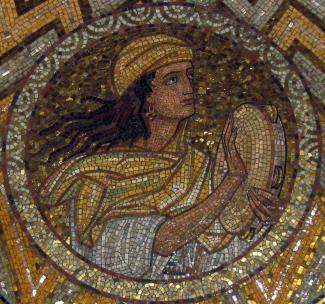 Mirjam was not just a minor figure in the Bible, but an important person. This is indicated by the verse in Luther Bible - Numbers 20: 1, which describes when and where Miriam was buried. And only really important people in the Bible described where they were buried.

Another indication of how important the wife Mirjam was for the history of Israel is the sentence from the prophet Micha, who in the 8th century BC reminded his listeners of the protective accompaniment of God through the desert time as follows: "I have you after all brought you up from Egypt and ransomed you from the slave house. I sent Moses before you, and Aaron and Miriam. "

Mirjam is therefore regarded as one of the three leading figures from the central liberation story of the people of Israel and named seven times in the Bible. In addition, she is referred to as a prophetess in "English Lutheran Bible - Exodus 15: 20-21".

In Exodus 2: 1-10 Miriam is described as the protector of her brother Moses. In the Jewish tradition there are still legends of how God appeared to Mirjam in a dream and predicts the birth of the brother, his later role and her task as sisterly protector.

After the miracle at the Red Sea, which is part of the story of the liberation from Egypt, it is told how Mirjam took the kettledrum and sang a song of praise for God. Many sang with her, and she led worship and praise. This Mirjamlied in Lutherbibel 22017 - Exodus 15: 20-21 "is one of the oldest texts of the Old Testament. With this song she interprets history: She calls and sings it into the soul of Israel that the liberation from Egypt is good for God Act on the people of Israel.

Mirjam is called a prophetess. But there are no known prophetic sayings from her. Her dancing and singing can, however, also be understood as her individual and her own way of prophetic service. There was a tradition in Israel that combines music and prophecy. An example is given in the Book of 1 Samuel: When the prophet Samuel anoints Saul as the first king in Israel, he gives him the following words on the way: "... and when you come into the city there, you will meet a host of prophets who Come down from on high, and before them harp and kettledrum and flute and zither, and they will be in a rapture: and the Spirit of the Lord will come upon you, and you will be raptured with them, and you will be transformed and a different person If these signs now come to you, do what comes before your hands, for God is with you "Samuel + 10: 5-7

Miriam as a prophetess

This description of the group of prophets makes it clear what it means to be a prophet or prophetess, namely to be touched directly by God's spirit and to do what is to be done at this moment. God's spirit blows where it wants, God's spirit cannot be forced into pre-formed structures, God's spirit gives unexpected new insights and realizations. Perhaps Mirjam was such a prophet with her kettledrum: touched and enraptured by the Spirit of God.

In "Luther Bible - Numbers 12: 1-15" a story is told in which Mirjam and Aaron have a conflict with Moses.

The very first verse is confusing. Mirjam and Aaron turn to Moses - it has to do with his Cushitic wife. Some Bible translations write that they spoke against Moses "because of his wife" or in Luther "for the sake of his wife". There are explanations in the interpretative history that Mirjam and Aaron are against the fact that Moses took a foreign woman as his wife. 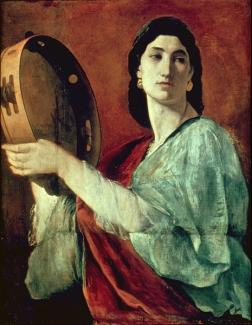 God speaks through Miriam and Aaron

In new books it is emphasized that the Hebrew word can be translated as "about" instead of "because". Based on the following conversation, it stands to reason that they did not speak against his wife, but with Moses about his wife. Because the father of Moses' wife Zippora had given Moses the advice in "Mose + 18: 1-27" that he should not concentrate all power and tasks on himself, but should delegate tasks. And that is what it was apparently about Mirjam and Aaron: That God also speaks through them and not only exclusively through Moses.

As a punishment, Mirjam (noticeably not Aaron!) Gets a rash. That means social isolation, exclusion from religious life and certainly also shame. In the history of interpretation, however, there are different approaches to this narrative. One possible explanation for Miriam's severe punishment was that there was a conflict between law, priesthood, and prophecy in Israel at the time the text was written.

And this text wants to place the prophetic powers under the law. The prophetic is often paired with criticism, a call for change and thus also with uncertainty, unpredictability and uncertainty. Prophets are always uncomfortable! The law, on the other hand, guarantees order in this time of return, insecurity and building, it brings security. Moses stands for this law that gives security.

Mirjam was sick for seven days

Another explanation could be that in patriarchal society it was uncomfortable for a woman to be such a high-ranking leader in the name of God. Perhaps one interpreted Miriam's illness as a punishment from God in order to underpin the supremacy of the patriarchy.

Ultimately, thanks to the prayer of Aaron and Moses, Miriam was only sick for seven days. Seven days in isolation - or you could see it as a break: seven days to collect yourself and regain your strength.

At the end a nice sign of solidarity: The people did not leave her behind, but they waited until Mirjam was healthy again and could go back with the Israelites.

Mirjam as a woman with her own opinion

We only have individual pieces of the mosaic that we find in the Bible from Mirjam's life, but they sparkle over to us from the space of time and reveal an intelligent, headstrong, strong faithful woman. The prophetic tradition of Miriam could not be erased from the biblical message. Their song sounds up to our time. She sings and dances ahead of us.

Mirjam is a prophet, a woman with an independent religious and political opinion. Together with her brothers Aaron and Mose, she is responsible for the fate of the people of Israel, who are liberated from Egyptian rule and are on the long and arduous journey through the desert to the promised land. The figure of Mirjam reminds us again and again that it was a community of men and women who led the people and led them to freedom.

SURNAME: According to Jewish tradition, the name means "bitter sea". In addition to this explanation, there are many other attempts at translation: the sublime, the exalted, the stubborn or untamed, the gifted, the fertile.

ORIGIN: Sister of Moses and Aarons

TO READ MORE: Ursula Rapp: Mirjam. A feminist-rhetorical reading of the Mirjam texts in the Hebrew Bible. de Gruyter, Berlin 2002.

The Exodus from Egypt or Exodus is the traditional story of the rescue of the Israelites from the slavery of Pharaoh, which can be found in the Book of Exodus in chapters 1-15. With this begins the special history of Israel with its God Yahweh in the Hebrew Bible, through which he makes himself known to his people and chooses them as his covenant partner.

This theological history of the origin of Israel is the central creed of Judaism. Egyptian sources document the forced labor of Semitic nomads (called Hapiru) for building projects by pharaohs of the New Kingdom (18th to 20th Dynasty, around 1500-1000 BC) and the occasional escape of small groups of such Semitic forced laborers. The Exodus tradition shaped many other traditions of Israel.

Greek and Roman authors of antiquity responded, sometimes with counter-narratives. A variant of the excerpt story is passed down in the Koran. 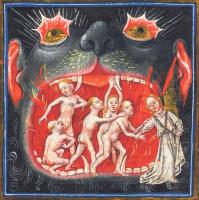 The fear of uncontrollable, evil forces that want to throw everything into chaos seems to be deeply anchored in people. This is not only evident when children are afraid of monsters in their closets. What is often projected onto everything foreign today was imagined in biblical times as gigantic monsters that could not be conquered by humans. A portrait of Leviathan and Behemoth.

Start the week with our newsletter.