What is OnlyFans? (Function, earnings, risks)

As a social network, OnlyFans goes one step further than Instagram and Twitter. We'll tell you what's behind the platform.

OnlyFans is a social network where posts, photos and videos can be shared. Unlike Instagram or Facebook, users are free to charge their profiles for a fee. That means, followers or fans have to have a certain monthly subscription fee pay to see the content.

The idea behind this is to give artists, media workers or even influencers the opportunity to earn money without having to rely on advertising or the sale of products. In the meantime, however, the platform is increasingly being used to share explicit pictures and videos for a fee. The phenomenon is so widespread that the Spiegel even gave it its own name with a new word: Intimfluencer.

OnlyFans was founded in London in 2016. The site is made by a company called Fenix ​​International Limited which, unlike many OnlyFans users, is more reluctant. There is almost no information about the company on the official homepage.

How does OnlyFans work?

To register on the platform you have to follow the official terms of use be at least 18 years old. In practice, however, minors could at least register, since they can register via an email address, Twitter or Google account. Only when you want to share content with others do you have to upload a close-up of a valid ID document and a selfie with the said document on it to confirm your age.

Furthermore, the account information for the payout must be entered. Fans who want to take out a subscription can in Germany Pay by credit card or Giropay. Payment via PayPal is not possible as the company excludes certain sexually oriented materials or services in its usage guidelines.

The price range for a subscription is between $ 4.99 and $ 49.99 per month and can be determined by yourself. Tips and paid private messages serve as a further source of income.

Can you use Onlyfans anonymously?

At OnlyFans you have to differentiate between users and creators. A simple user can Register completely anonymously by email, Google or Twitter account. Payment can also be made anonymously via Paysafecard.

If, on the other hand, you want to create your own content and charge for it, you have to provide proof of identity. OnlyFans requires a selfie with a valid identity card and a close-up of the document. This is to ensure that minors cannot share any content.

Is OnlyFans also available in Germany?

Although the translation of the English language site is still lagging behind, the service can also be used by German users. However, at the time of the research, there was neither a German translation of the terms of use nor the data protection declaration. Even the official FAQs were still in English.

Since the operating company is based in England, it is subject to at least the European General Data Protection Regulation (GDPR). Nonetheless, the privacy policy states that personal information is shared with companies in North America. In this case, the protection of the GDPR expires.

In general, the OnlyFans privacy policy is something opaque. It is therefore advisable to first run both these and the terms of use through a translation tool and read them carefully.

Also read: These celebrities are already on OnlyFans

How much money can you make with OnlyFans?

Some users report astronomical sums of money they earn on OnlyFans every month. The creator of the channel "The OnlyFans Bible" claims that he has explicit images Earned $ 50,000 in a month and shows the platform's accounts as evidence.

The German YouTuber missesvlog, on the other hand, did a self-experiment $ 9,000 in a month earned with lingerie pictures that she says she would like to donate to an organization for women's rights. Other YouTubers also report earnings in the five-digit range. From the outside, such sales seem too good to be true at first sight. But with a small sample calculation, it quickly becomes clear how much money can be earned on this platform with the corresponding followers. The following graphic shows what gross earnings would theoretically be possible with 100, 1000 or 5000 followers at the lowest subscription price of $ 4.99. 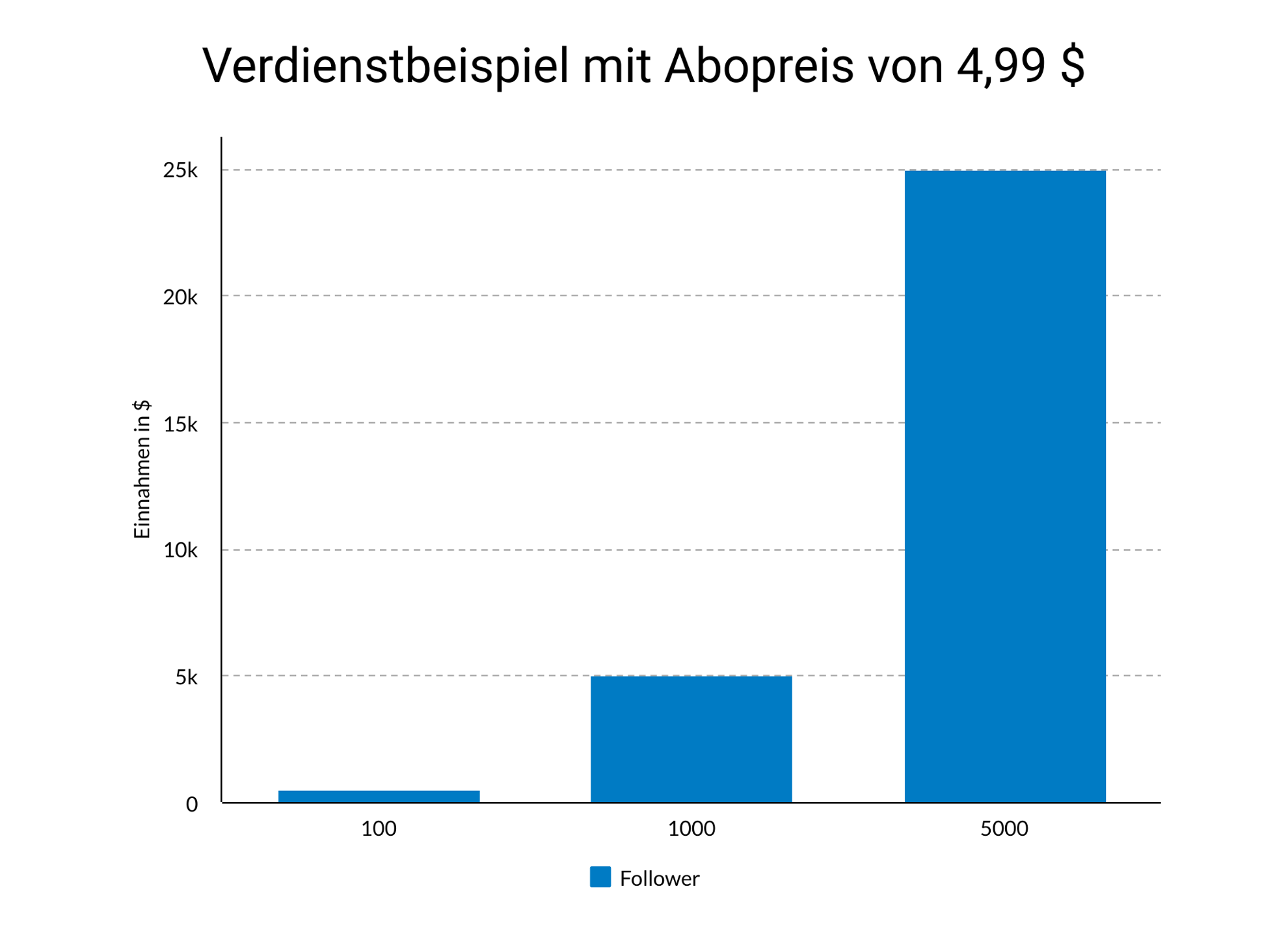 So let's assume that an influencer has 1000 followers and charges $ 4.99 for a subscription. In total, he would earn around $ 5,000 a month from the subscription fees alone (tips and private messages not yet factored in). 20% of this goes to OnlyFans. This would leave the influencer with $ 4000 a month, which is at the current exchange rate just under € 3400 corresponds to. Of course, taxes and other costs are not included.

Nonetheless, a considerable income, especially considering how conservative this calculation is. If you ask for $ 49.99, you could earn almost $ 50,000 with 1,000 followers. However, this is also the biggest criticism of the platform.

Do I have to pay taxes on the income?

Yes, that is revenue earned through OnlyFans taxable and must be reported to the tax office via the annual tax return. The taxes to be paid depend on the amount of earnings and the activity reported to the tax office. For example, anyone who earns money as a freelancer with OnlyFans is Income tax and, if applicable, also subject to sales tax. On the other hand, if you decide to register as a business, the Business tax due.

Viewed soberly, OnlyFans is not reinventing the wheel, but is successfully combining two business models that already existed: the Free movement of Twitter with the Paid model from Patreon. A company like OnlyFans was the logical consequence of the fan-star relationships created through social media. Some influencers and fans are ready to go one step further, as the business model proves. Even if the influencers only follow a small part of their following on OnlyFans, it can turn into one lucrative income opportunity develop.

And therein lies a great risk. Due to the high earning potential, the Young people's inhibitions are fallingto undress for the money. It has never been easier to make quick money bare skin. With this in mind, it is important to understand that everything you reveal about yourself on the Internet can come back to you at some point. This is how the Federal Office for Information Security (BSI) writes about the dangers of social media including the following:

“Information, texts and, in particular, images are often archived by private individuals on their own computers, even outside the networks. Data can suddenly appear on other pages on the Internet or be misused for other purposes - even after they have supposedly been deleted from the social network. "(Source)

In the terms of use of OnlyFans it is even expressly regulated under point 8.2.3 that one may make copies of the website content for private use:

If a user decides to post sensitive images anywhere else on the Internet, they are doing so illegally, but at the same time they start a process, which can hardly be undone. Once the pictures are online, they are difficult to get out there, as the Federal Ministry of Justice and Consumer Protection (BMJV) writes in this regard.

Who only sees quick wealth and believes that the end justifies the means, perhaps unconsciously obstructs its future. Young people in particular, who are confronted with the display of wealth on social media every day, could fall into the belief that they can afford a similar lifestyle by giving up their privacy. After all, anyone can take nude pictures of themselves.

Although the platform wants to use the verification process to ensure that no minors can register, the BBC has uncovered a case in which a 16-year-old girl had made money for seven months from nude pictures. she has used the ID of an older friend to register and sometimes several profiles are used to slip through the operator's security checks.

The report also states that online platforms such as OnlyFans are by law in England are not obliged to monitor explicit content that may have been created by minors. In a statement quoted by the BBC on the case, OnlyFans said that the verification process has since been improved and that such attempts at fraud are strictly prevented by continuously checking the systems.

Nonetheless, parents in particular should keep an eye on the media usage of your children and question them critically. So before you register on a platform like OnlyFans, you should be aware of the possible risks and read both the privacy policy and the terms of use carefully. Further information on media literacy in general and the risks on the Internet can be found on the websites of the BSI, BMJV and “Surfing without risk” of the BMFSFJ.

Now read on: When does social media start for children and young people?