Did God create the third eye

India is a country whose history goes back thousands of years. Many different peoples and ethnic groups lived and still live in the country, in which different religions also coexist ................

Also Shiva, as part of the divine trinity Brahma - Vishnu - Shiva, manifests as the destroyer. As such, however, it is also the cause of creation, because without the destruction of the old cycle, no new period of creation can arise. Brahma acts as the creator god and Vishnu as the god of preservation. The three divine aspects represent the three fundamental forces of nature that exist in the world:

Shiva embodies the tendency towards dissolution and annihilation. The name Shiva literally means "auspicious, promising". After the destruction and before the next cycle of creation, the universe rests in Shiva. He is also known as the Mahayogi, the chief of all yogis, whose drum sound urges people to perfect.

He has three eyes and four arms; holy ashes were smeared all over his body.

In two of his hands he carries a trident and a drum, the other two take up symbolic hand positions in the meaning of protection and the granting of benefits.

Shiva has long, felt-like hair and the life-giving river Ganges rises at the top of his head.

He wears a crescent moon as a crown and clothes made from tiger and elephant skin.

Its neck, around which a large cobra winds, is blue. Shiva has a chain and garland of skulls around him, and snakes adorn his body. He also wears a belt, a sacred thread and bracelets.

Shiva's eyes are half closed. It is a sacred position. Closed eyes indicate that the person has withdrawn from the world. Open eyes indicate someone who is fully turned towards the world. The half-closed eyes therefore mean that Shiva's consciousness rests in the inner self, while his body remains active in the outer world.

Artists often show Shiva meditating, with the snow-white background of Mount Kailash, which means absolutely pure awareness. The state of meditation shown by Shiva's posture harbors deep symbolism, as meditation is the final gateway to self-realization. In order to realize God it is essential to meditate.

The trident (trishula) symbolizes the destruction of the ego together with its threefold desire nature in connection with the body, mind and intellect. Shiva with his trident indicates the victory over the ego, which leads to perfection. The three points represent the three Gunas (qualities): Sattvas (pure, clear), Rajas (active) and Tamas (dull, sluggish and unmoved); the three phases of creation: creation, maintenance, destruction; as well as the three states: being awake (Jagrat), dream phase (Swapna) and deep sleep (Sushupti).

The drum represents sound, alphabet, grammar, language and the entire field of sacred and secular arts and sciences. The drum in his hands means that all of creation, including the arts and sciences, arose from his divine will, or are merely a game of his. First Shiva drums, then he dances the dance of the universe as Nataraja. The two eyes of Shiva symbolize the sun and the moon; his third eye represents the eye of knowledge and wisdom, the center of his omniscience.

The tiger skin symbolizes complete relief from anger. The elephant skin that he wears symbolizes that all animal impulses can be brought under control. So Shiva rises and masters all manifested power.

Shiva is in the company of a snake (the cobra). It is also characterized by an ambiguous symbolism. On the one hand it stands for earth and death, but on the other hand the erect serpent is a symbol for spirituality and all-connectedness. A master of time and energy, Shiva is called Nilakantha (blue neck) because he drank the poison that threatened to destroy the world when the gods and demons churned up the ocean of milk to gain the nectar of immortality. The poison stopped in his throat and stayed there, saving the outside world and Shiva himself. But the poison stained his throat blue.

The skull garland and the ashes on Shiva's body symbolize his role as Lord of Destruction. This also depicts the cycles of the appearance and disappearance of human races. The skull garland also represents the egos of humanity that he has destroyed.

Shiva manifests in different ways. He is beyond names and forms. He appears in terrifying figures, but also in peaceful, benevolent figures who grant grace and good deeds. The best known benevolent figures are Nataraja, the lord of the dance, Ardhanarishvara, his half male / half female form and Mahayogi, the lord of yoga and yogis.

Shiva is also a great dancer. He is called the King of the Dance (Nataraja), but his dance is not a flirtation, but an act of creation - it creates and destroys the world at the same time in this cosmic dance.

The Nataraja portrait shows Shiva standing in a dance position with four hands and two legs.

He holds a drum (damaru) in his upper right hand and fire in his left. The lower right hand is in the position of the "abhaya mudra" (protective gesture and sign of fearlessness). The left hand points to the raised left foot. His left foot stands on the war fish demon.

Usually this representation is surrounded by a circle of fire. Shiva dances every evening to alleviate the sufferings of creatures and to entertain the gods who gather on Kailash Mountain.

The drum represents the sound of creation and the fire symbolizes the flames that destroy the world at the end of time. His other two hands, offering blessings, benefits, and protection, turn to followers and encourage them to seek shelter at the feet of the Lord.

The demon on which Shiva stands symbolizes the ignorance that makes us lose our balance and our awareness. Shiva's dance leads to a heaven of bliss in which the ego dissolves. In his "Tandava" dance, Shiva destroys the demon of ignorance for the benefit of the followers who give themselves completely to him. 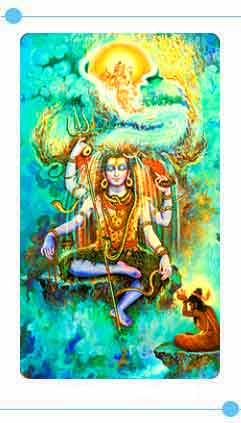 The sacred river Ganga originally flowed as a Milky Way only in heaven; The following myth reports about their descent to earth, their humiliation by Shiva, their integration into the Shivaite circle of gods and their power to forgive sins: Sagara, a king of the sun dynasty of Ayodhya, had 60,000 failed sons. When he wanted to celebrate a horse sacrifice, the king of the gods Indera stole the holy horse and tied it to the forest hermitage of the sage Kapila (an incarnation of Agnis). Sagara's sons thought he was the thief and wanted to kill him, but he burned them to ashes with the power of his asceticism. Kapila advised the desperate king to atone for the ashes of his sons through the purification power of the Ganga and thus to redeem them. So Bhagiratha, a relative of the king, practiced asceticism until Ganga promised to come down to earth if anyone could intercept the violence of their water masses. Shiva offered to subdue Ganga; she plunged down confident of victory to crush Shiva, but he caught her with his hair and guided her across the earth. The ashes of the 60,000 ancestors of Bhagiratha were atoned for. 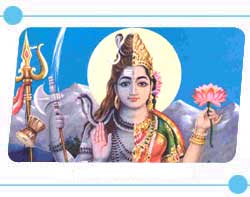 His aspect as "Ardhanarisvara" represents Shiva half as a man and half as a woman. His left and feminine side represents Parvati, his wife.

This picture symbolizes the bipolar nature of the world, the equality of man and woman, as well as the union of Shiva-Shakti, which leads to spiritual enlightenment. Basically the nature of the world is bipolar. Everything exists as an opposition, characterized by two opposing opinions or natures. The principle of opposition is represented here through the masculine (Purusha) and feminine (Prakriti) aspect - Shiva and Shakti.

Most of the devout Hindus do not worship Shiva in his anthropomorphic representation, but in his lingam form surrounded by yoni, the female sexual organ - yonilingam.

According to a certain conception of the Hindus, the lingam, the erect phallus, is full of heat, from which the whole world has to suffer from time to time, as the mythology often shows. It is one of the duties of believers to keep the Shiva lingam cool or to cool it down. Therefore, in every Shiva temple, they hang a copper vessel with a small hole above the Shiva lingam and fill it with water. Around the clock, water drips from the vessel onto the Shiva lingam, preventing it from overheating.

A Shiva lingam consists of three parts. The lowest part is square, the middle octagonal, the third cylindrical and rises above the base.

The Shiva lingam is attached so that one half is embedded in the earth while the other half remains above the surface. The part that appears above the surface represents the manifested visible world of diversity.

The half below the surface represents the invisible foundation that supports the upper half and symbolizes the unmanifested supreme reality.


Discover the city of Shiva: Varanasi on the Ganges!