The British series “Pure” tells of Marnie, a woman in her twenties, who suffers from obsessive sexual thoughts - with ease and a rough sense of humor. 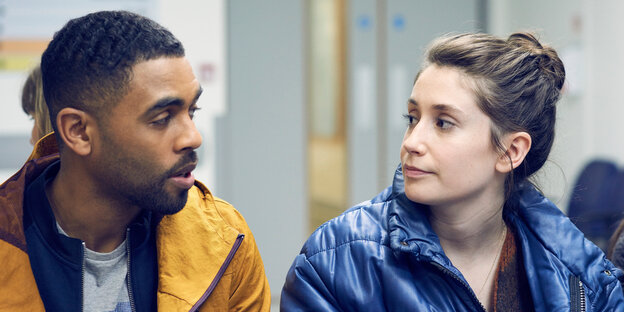 This is the opening scene of the British series “Pure” by Aneil Karia and Alicia MacDonald, which will be broadcast on ZDFneo from Friday and will then be available in the media library. The events of the six half-hour episodes soon shift from the Scottish countryside to London, where Marnie is staying in the clothes closet of her school friend Shereen (Kiran Sonia Sawar). She hopes to be able to steer her life, which has been shaken by her obsessive thoughts about sex, into orderly channels.

At this point in time, Marnie was not yet aware that her impulses - sometimes visualized for the audience as briefly flashing, barely recognizable montages, sometimes in drastic detail - are an obsessive-compulsive disorder and thus a mental illness. Also because the series takes enough time to trace this gradual process of knowledge, it is considered exemplary in dealing with the subject of "mental health".

She has one of these experiences with Amber (Niamh Algar), whom she meets in a lesbian bar. Shortly after arriving, Marnie set herself the goal of trying sex with a woman - to make sure her obsessive thoughts weren't caused by suppressed homosexuality. At the end of the chaotic night of near-love, she realizes that not every thought requires implementation. After all, an internship at the hip, feminist magazine that Amber writes for will result in an internship.

All six episodes of "Pure" run on ZDF neo in the night from Friday to Saturday from 11:40 p.m. and are available in the media library from 10 a.m. on Saturday

Marnie's story gains a certain credibility from the fact that Kirstie Swain's script is based on the memoir of the same name by Rose Cartwright, who suffers from a comparable obsessive-compulsive disorder. in the Guardian Cartwright expressed the hope that the series could finally clear up the misunderstanding that the phenomenon of "obsessive-compulsive disorder" is all about order or cleanliness.

The combination of comedy and drama does not seem too fake, but is also thanks to the charming characters of the circle of friends, to which Amber's roommate and colleague Joe (Anthony Welsh) soon belongs. Out of the consistently convincing cast, Charly Clive stands out, who can draw on her own biography for the idiosyncratic alliance of illness and humor: when a brain tumor the size of a golf ball was discovered in her at the age of 23, she christened it without further ado "Britney" and wrote a stand-up program about it.

The light-heartedness of the series allows her to flow into a wonderfully refreshing self-knowledge that does not treat people, whether their disorder, like a raw egg or even a dead person, about whom nothing bad can be said as is well known: As Marnie, the helpfulness of her astonishingly caring friend The series ends with the final sentence: "Wow, I'm really an asshole!"