With the LG G6, the company released a hit in 2017. However, the cell phone hardly prevailed against the faster Samsung Galaxy S8, especially since other competing products are also vying for the favor of high-end buyers - such as the Galaxy Note 8, Google Pixel 2 XL, Huawei Mate 10 Pro and Apple iPhone X. Yes LG does not give in: The LG V30 should win new customers with fresh technology and a fresh design. COMPUTER BILD has extensively tested the smartphone and reveals in advance: The V30 is definitely worth a look and goes down in history as the best LG smartphone to date. The laboratory test shows why.

The LG V30 has been available exclusively from 1 & 1 since October. In combination with a 5 gigabyte (GB) all-network flat rate in the O2 network, for example, it costs 350 euros - i.e. 550 euros below the non-binding retail price (RRP) without a contract. For comparison: Providers like WinSIM have a similar tariff for 14.99 euros per month, but if the 4 GB limit is exceeded, an automatic data system takes effect with an additional charge of up to 6 euros per month. The additional price for the 1 & 1 tariff, which comes without data automatic, is 360 euros. Conclusion: At least compared to the RRP, the 1 & 1 offer is 190 euros cheaper.

Now for the laboratory test of the new top model! After unpacking and switching on the LG V30, you practically only see the display at first. No wonder: It's big, comes in the same 18: 9 format as that of the G6 and thus covers almost the entire front. With the V30, LG is installing an OLED display in a smartphone for the first time. The result is bright colors with rich black levels. With a ratio of 8666: 1, the contrast is much higher than that of the LG G6 (1094: 1); However, the V30 doesn't quite come close to Samsung's Galaxy S8 (9227: 1). LG is also losing out in terms of brightness: the value of 584.7 candela is decent, but the Galaxy S8 manages 741.2 candela. The color fidelity, on the other hand, is similar in both devices and is around 93 percent. Interesting: The V30 display also shows HDR videos - for example from Netflix or Amazon - with an increased HDR contrast range according to the HDR10 standard. The enormously high resolution of 2880 × 1440 pixels can be used, for example, for Google's Daydream VR glasses, the image of which then looks less blocky. COMPUTER BILD put the LG V30 through its paces in the laboratory.

As the tech blog Ars Technica found out, the display of the LG V30 seems to be unevenly illuminated: the screen looks brighter at the bottom. COMPUTER BILD made its own experiment and found: true, but only with minimal display lighting, little ambient light and certain screen contents (Ars Technica used a gray image, for example). With normal use of the LG V30, the irregularities should not be noticeable. 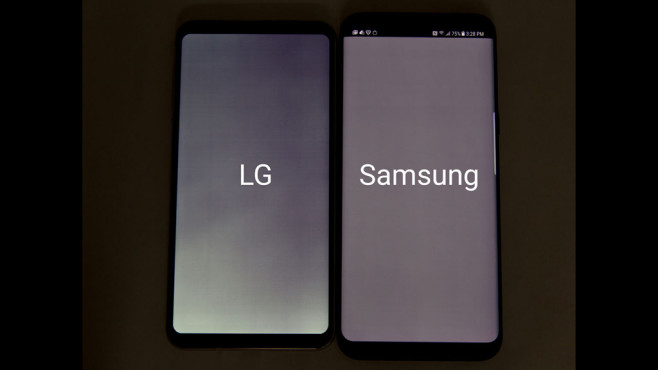 Ars Technica found that under certain conditions the display had uneven lighting. But this is hardly noticeable in everyday life.

LG V30: The next design step

The LG G6 was the first smartphone with a long display in 18: 9 format that covers almost the entire front. In addition to the screen, only a thin, angular housing frame remained with the G6. The LG V30 goes one step further: the device is rounded on all edges and polished to a shine. So the whole thing looks more like a piece and is much more comfortable to hold. This is also necessary, because the display has grown a little: from 5.7 on the G6 to 6 inches. The case is also slightly larger (151x75.5x8 mm), but thinner and, at 153 grams, even 9 grams lighter. The home button of the V30 is in the middle on the back, as usual. LG scores points compared to Samsung's top models in terms of operation: While the fingerprint sensor on Samsung is not always easy to hit and reach, the finger on the V30 can easily reach the sensor, which is placed in the middle under the dual camera, even if you hold your finger in a normal position . In the laboratory test, the smartphone survived the drop test unscathed; The housing and display are also insensitive to scratches. 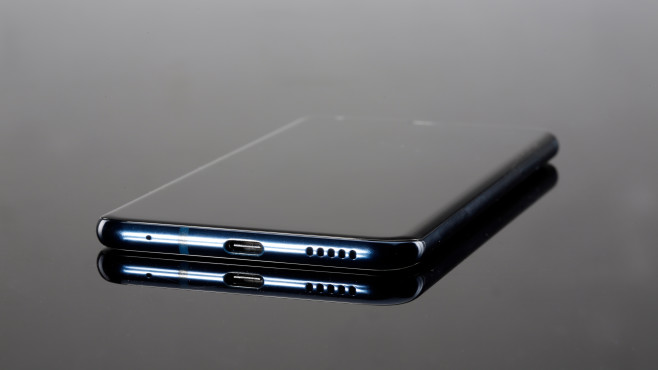 The USB Type-C socket is located at the bottom of the LG V30, along with a microphone and loudspeaker.

As usual with the G5 and G6, LG has installed a dual camera on the back of the V30. In addition to the normal 16-megapixel camera, there is an extra wide-angle camera (13 megapixels, 120 degrees). On the other hand, LG does not use telephoto lenses or depth-of-field experiments with a bokeh effect. The argument: Bokeh effects can also be achieved using software, but wide-angle shots cannot. Exciting: The V30 is the smartphone with the largest, brightest aperture to date (f = 1.6). For comparison: Samsung's S7 and S8 only have an aperture of f = 1.7. This is possible because the front of the six built-in lenses in the main lens is made of real glass instead of plastic. This should allow 4 percent more light to be captured. This means that the V30 theoretically shoots the brightest photos in the dark. In any case, LG wants to give the images more dynamism and predefined color moods (from romantic to beauty) through optimized software and predefined color adjustments. Numerous additional functions are intended to spice up snapping and filming. For example, two pictures taken directly behind one another from the main and front cameras can be placed next to one another, which not only captures the subject, but also the photographer's reaction. 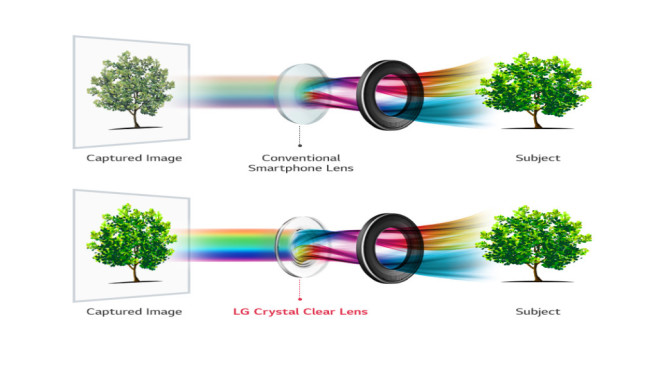 With this diagram, LG would like to explain what distinguishes the LG V30 camera from conventional smartphone snaps.

Photos in the laboratory test

In the laboratory test, photos in the dim light surprisingly failed despite the bright aperture. The reason for this: The very annoying picture noise distorted the picture content. If you switch on the flash, you can take slightly better pictures, but they are also noisy and have falsified colors. The image quality in low light does not just depend on the aperture: lens quality, sensor, software and intelligent use of the image stabilizer (for longer exposure times without blurring) also play an important role. In daylight, however, the LG V30 outperforms the Galaxy S8: snapshots are a bit dark, but more detailed, sharper and more true to color than Samsung's snapshots. The front camera shoots images that are as good as those of the Galaxy S8; The triggering and storage times are very short. 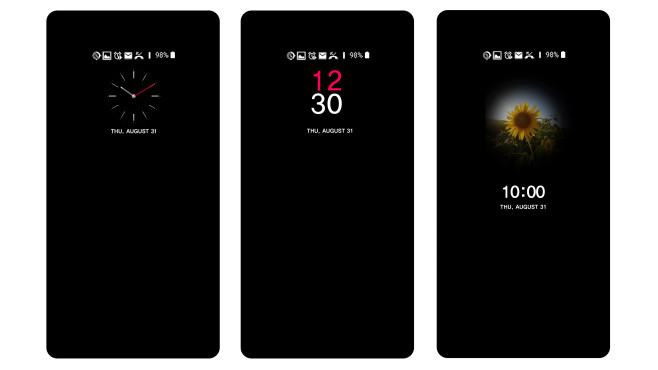 The always-on displays of the LG V30 can be customized by the user.

That should be music

Even with the V10, LG set great store by high-quality digital-to-analog converter chips (digital-to-analog converter, DAC) with internal 24-bit processing, which ensured good sound. While the G6 lacked this technology in Germany, it is back in the V30. Predefined sound profiles and filters are intended to ensure a “better music experience”, depending on your taste and style of music. In the laboratory, the sound at the headphone output and on the hi-fi system was actually convincing with a reproduction that was almost true to the original. The included headphones are only moderately good. Music recordings, which the device also records with 24 bits, should also sound better. Thanks to the optimized “Acoustic Overload Point”, you can even handle very high volumes at concerts, for example, without distorting the music. A dedicated app called "HD audio recorder" is preinstalled on the V30 for audio recording. The good microphone should also help the V30 to recognize its owner based on the voice, so that you can unlock your mobile phone with the slogan "Open sesame", for example. In the practical test, the method worked very well, but it is not absolutely certain: Capable voice imitators can remove the lock with a little practice. 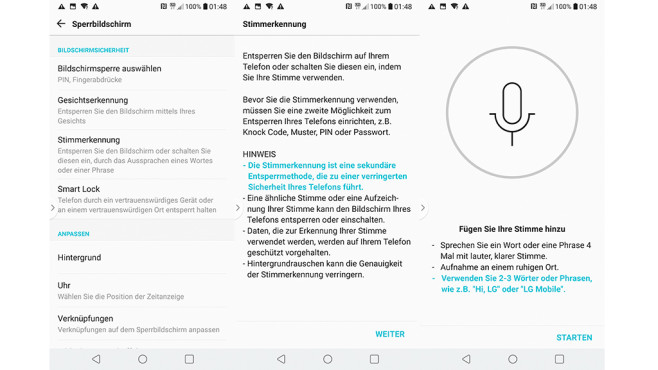 The LG V30 can also be unlocked with your voice. This works reliably, but is less secure than other unlocking methods.

The second display is dead

LG does away with the mini display above the actual screen - introduced with the LG V10 and LG V20 - in the V30. Instead, users call up important functions via an operating window, which they display by tapping the arrow symbol on the edge above the normal screen display - the so-called floating bar. The operation of the window is, however, not very intuitive and quite fiddly. So the floating bar is not a great alternative to the second display.

Android NewsletterYou are almost there!

Tests, news and tips about Google
Smartphone and tablet operating system. Please click to complete the order
on the confirmation link that you just emailed
got.

All newsletters at a glance

LG has brought the other hardware up to date: The Qualcomm Snapdragon 835 processor, together with 4 GB of RAM, ensures high speed. The operating speed is a little slower than the Galaxy S8, but the work pace is about the same. With 64 GB (freely available: 49.1 GB), the internal memory is sufficient for most users, and it is also expandable. The battery can be charged either quickly by cable or wirelessly (inductively). The battery is of normal size with 3,300 milliampere hours (mAh), but surprised in the test with its enormous runtime: the LG V30 lasted for 17 hours and 11 minutes with typical use! For comparison: The Samsung Galaxy S8 runs out of breath after just 9 hours and 18 minutes. Cooling channels and constant temperature monitoring should prevent the battery from overheating. The test device ran with Android 7.1.2; LG has already announced an update to Android 8. The first beta test recently started in South Korea.