The development of the aircraft intended as a replacement for the MiG-21 began in 1983. The first flight of the aircraft equipped with a jet engine and a delta wing took place on January 4, 2001. On May 4, 2003, the Indian Prime Minister Atal Bihari VajpayeeTejas as a name for that originally Light Combat Aircraft (LCA) known aircraft, but this original name is still used by the public[1].

It is equipped with a quadruple redundant fly-by-wire control based on the HOTAS principle and modern avionics. These include multifunctional displays in the cockpit suitable for night vision goggles (including three 5-inch screens), FADEC controls for the engine, INS with laser gyro and pulse Doppler multi-mode radar. The aircraft, made of lithium-aluminum alloys, carbon fiber (45% of the structural mass) and titanium alloys, is equipped with a Martin-Baker ejection seat.

Originally, the LCA should be powered by the Indian Kaveri engine, which is still to be developed. After the Kaveri experienced increasing problems during the development phase, which could not be solved even with the help of the French engine manufacturer SNECMA, HAL resorted to the proven General Electric F404-GE-F2J3 for the first 41 copies of the Tejas and wrote out the final engine. The tender called for the delivery of finished engines as well as technology transfer and license construction of the engine in India. Candidates were the Eurojet EJ200 and the now selected General Electric F414-INS63. The contract was announced during the US President's state visit to India. It comprises a total of 99 (according to other sources 107) engines for 650[2] Million US $, with an option for 49 more. [3][4] The first eight engines will be delivered ready-made by GE, the remaining 91 are to be assembled in India from prefabricated assembly kits.

The Eurojet consortium advertised that the EJ200 was lighter than the competing engine, which meant that no changes to the design of the Tejas were required. It is not known to what extent the choice of the F-414 will throw back the LCA program due to the expected redesign. 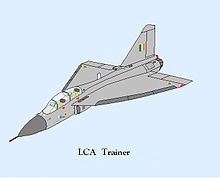 8 LSP aircraft are currently on order.