Why taxi app is important

With the taxi app through Athens

Anyone who has ever driven a taxi in Athens knows the ritual: you step out onto the street with your hand raised and yell in the direction of travel to stop one of the 17,000 taxis that are on the move around the clock. There are no taxi ranks in the Greek capital, except perhaps at the airport or in front of large luxury hotels. The constant driving stresses not only the nerves of the driver, but also the environment.

That could change soon - with the help of technology. A free app launched in September 2011 under the name "Taxiplon" allows taxi customers for the first time to secure the nearest taxi via PC, smartphone or iPhone. 300 drivers have registered with the Athens company for a monthly fee of 30 euros. Sotiris Nossis developed the idea together with his six employees in an app forge in the Athens suburb of Maroussi.

App against the traffic gridlock 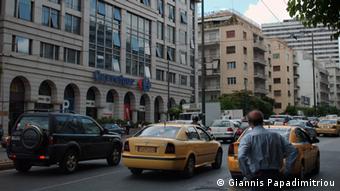 "With Taxiplon, the passenger has a direct connection to the driver. The control center remains outside and the car arrives on time: And the service is free for the customer," explains Nossis. He has been developing software for twenty years. Today the industry is experiencing a revolution in mobile technology that offers new opportunities for ambitious start-ups, believes the computer scientist, who studied in New York.

Studies have shown that the never-ending taxi traffic is responsible for more than 25 percent of fine dust emissions in the Greek capital. In addition, transport scientists have calculated that a taxi, with its extremely fluctuating driving behavior, is ten times more stressful for the chaos traffic in Athens than a private car. 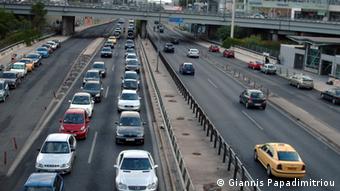 "Environmental compatibility and sustainability are important to us and are operated here through the optimized use of resources," says taxi app developer Nossis. In relation to the number of inhabitants, Athens has one of the largest taxi fleets in Europe and the drivers are aimlessly on the lookout for customers. With a consumption of up to 100 liters per day, you would not only lose valuable time but also a lot of money by driving back and forth, explains Nossis.

The Athens taxi app is definitely expandable in terms of environmental protection. Since April Taxiplon has been cooperating with a mineral oil company that offers CO2-neutral fuel and is beating the drum for it: With just two clicks, taxi drivers get free information on the petrol station network and the shortest route to the petrol pump on their display. 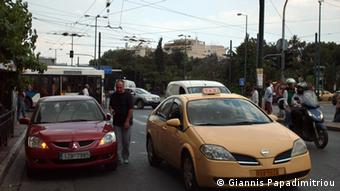 But with all understanding for the environment: Nossis does not see himself as an activist. First and foremost, it is about his profit. The entrepreneur emphasizes that the initial investment must pay for itself as quickly as possible.

"Fortunately, I have a solvent business partner at my side who has invested over 500,000 euros in this idea. I couldn't have raised the money on my own," explains Sotiris Nossis. But unfortunately there are only a few people in Greece who invest in business ideas, because the money would rather be invested in real estate and other values. Now he is about to open up service markets abroad, says the small business owner.

Jump onto the world market

He took a step towards internationalization at the world's largest mobile communications trade fair in Barcelona, ​​where the smartphone app was nominated for a "Global Mobile Award". Since then, inquiries from abroad have increased, explains Alexandros Tziranis. The young computer scientist is responsible for marketing and sales at Taxiplon. 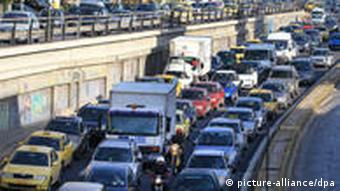 "We are already represented in Romania and Moldova through franchise partners, where over a thousand taxi drivers are registered with Taxiplon," says Tziranis. There have been further inquiries from England, New York and the region around Rio de Janeiro in Brazil. He hopes that the contracts will be ready for signature by autumn - that would be a quantum leap for the company's development.

However, the Taxiplon employees have to take local peculiarities and needs into account if they want to be internationally successful. Flexibility is essential, if only for legal reasons, says Tziranis.

"There are big differences: In Athens the passenger can book a specific driver directly via smartphone. In New York that would not be allowed, you have to call the appropriate headquarters first," says Tziranis. The Athens programmer knows very well that a company that wants to expand abroad has to respond to local market requirements.