Meat - How Much Is Healthy?

Access to the specialist information exclusively for members and subscribers is now activated for you.

Meat is advertised as a piece of life force. Children need it to grow, and men are only half as manly without meat. Joking aside - meat and meat products definitely have their place in a balanced diet. The large product range and numerous preparation options offer a wide variety of flavors. Meat is therefore a popular food that is served in not inconsiderable quantities in this country. The most popular among Germans is pork, which consumes around 40 kilos per capita per year, followed by poultry at just under 11 kilos and beef and veal at 8.3 kilos. Half of it is consumed in processed form as sausage or other meat products. Even if meat consumption has decreased slightly in recent years, a German citizen eats an average of 61.6 kilos per person per year. In purely mathematical terms, that's 168 g of meat, meat and sausage products per day.

Meat contains many nutrients that can be easily absorbed and used by the body. In addition to water, muscle meat consists mainly of protein with an average of around 22 percent. It is rich in essential amino acids and therefore, together with egg and milk protein, is one of the proteins with the highest biological value. Due to its protein content, meat also provides a lot of purines. These are protein substances that are broken down into uric acid in the body and are normally excreted in the urine. A diet rich in purine can lead to attacks of gout in people who have impaired uric acid metabolism.

Less fat than many think

Because of its fat and cholesterol content, meat is rated as rather negative for health. However, meat has become lower and lower in fat over the past 20 years. The main reason for the decrease is the significantly leaner cuts compared to the past, which means that more fat is cut away from the start. In addition, younger and younger animals tend to be slaughtered, and new breeding breeds and differently composed feed also play a role. Lean meat, in which you cannot see any fat - whether pork, beef, turkey or chicken - now only contains between 1 and 4 grams of fat per 100 grams. While 100 grams of pork tenderloin contained just under 9 grams of fat in 1991, it is just 2 grams today. Even with very fatty pieces of meat such as pork belly, the fat content has fallen from just under 33 to around 21 grams per 100 grams over the same period. The fat content of beef has not been reduced quite as significantly in the course of the last few decades as that of pork and is around 4 grams for fillets and 8 grams for prime ribs.

Although cholesterol is one of the accompanying substances in fat, it is relatively constant regardless of the fat content. The cholesterol content in muscle meat fluctuates between 60 and 80 milligrams of cholesterol per 100 grams, depending on the type of meat and cut, regardless of whether it is pork, beef, veal, poultry or lamb. Here the kidneys and liver provide between 260 and 380 milligrams. Meat and sausage are the main sources of cholesterol, especially in men, of which they consume well over the 300 milligrams per day recommended by nutritionists.

Unsaturated fatty acids are on the rise

With the fat content in pork and beef, the proportion of saturated fat has also decreased. According to studies, it is less than 50 percent. The predominant fatty acid is monounsaturated oleic acid with a share of around 40 percent. In contrast to beef, pork shows an overall more favorable ratio of polyunsaturated and saturated fatty acids. In contrast, the ratio of omega-3 to omega-6 fatty acids in pasture-rearing cattle is better than in pigs. The composition of the fat in the meat can be influenced by the feeding. However, there are limits to the content of polyunsaturated fatty acids. The higher this is, the faster the meat spoils. In addition, with higher proportions it becomes softer and is then more difficult to process.

Beef and veal also contain conjugated linoleic acids (CLA). These polyunsaturated fatty acids are produced as a metabolic product of linoleic acid in the rumen and in the mammary glands of ruminants. Animal studies suggest that they lower the risk of cancer, atherosclerosis, and diabetes. However, the effects have not yet been proven in humans. The proportion of CLA in muscle meat can also be changed through the feed: In general, muscle meat from cattle that are on the pasture or eat grass has higher CLA levels compared to those that are given silage or hay. In tests in pig fattening, an increase in the CLA content only worked with appropriately fortified feed. At the same time, however, the proportion of saturated fatty acids and fat in the muscle as a whole also increased. In contrast, the oleic acid content fell.

Meat contains many important nutrients like iron, zinc and selenium, as well as vitamins A and B. The meat of pork and beef is significantly more nutritious than poultry. Pork is characterized by particularly high levels of vitamin B.1 and B6 out. Beef contains the highest levels of iron and zinc and a lot of vitamin B.12. Overall, the body can absorb and utilize the aforementioned nutrients from meat very well. Iron, in particular, is absorbed much better from meat than from vegetable sources. The National Consumption Study II again showed that meat contributes significantly to the supply of the above-mentioned vitamins and minerals, especially in men. It is not necessary for this, but it works more easily with a little meat in the meal, especially the need for vitamin B.12To cover iron and selenium. 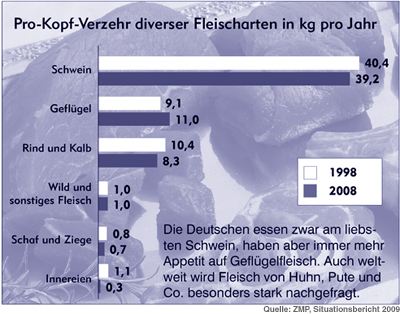 Despite the many positive and readily available ingredients in meat, there are repeated reports that red meat in particular is said to promote cancer and cardiovascular diseases. They come, for example, from the EPIC study, which with 519,000 participants is the largest epidemiological study worldwide that examines the links between diet and cancer and other chronic diseases. Their data support the belief that consuming red meat increases the risk of colon cancer. According to this, the risk per 100 grams of meat that is consumed daily increases by almost 50 percent, with the same amount of sausage products by as much as 70 percent. According to the EPIC study, the risk of gastric cancer (with the exception of cancer of the stomach entrance) is also linked to the consumption of red meat. For people who are infected with the gastric bacterium Helicobacter pylori, the risk is increased by a factor of five if they eat 100 grams of meat or meat product per day. Furthermore, studies show a connection between the consumption of red meat and a higher risk of pancreatic cancer and hormone-dependent breast cancer.

The world's largest study to date on the risk of red meat in particular, which was published in 2009, confirms that this food should be consumed with caution. Researchers at the National Cancer Institute in Rockville, Maryland compared the diets of over 500,000 US citizens between the ages of 50 and 71 over a 10-year period. Accordingly, large portions of beef, pork and other red meat and products made from them increase the risk of cancer and cardiovascular diseases. The study participants were divided into five groups, depending on their meat consumption. The group with the highest meat consumption had a higher risk of dying from cancer and heart attacks compared to the group with the least meat. The risk for all-round mortality was also increased. Overall, 11 percent of deaths in men and 16 percent in women could have been avoided if all participants had consumed less than 150 g of red meat and products made from it per week. In men who ate just under 250 grams of red meat a day, the risk of cancer death was 22 percent and the risk of cardiac death 27 percent higher than in the group with the lowest consumption. In women, the risk of dying from cancer increased by 20 percent with the same consumption and even by 50 percent for a fatal heart attack and stroke. These relationships could not be established for white meat from poultry and fish. The authors observed the opposite trend here. A working group in Cambridge was also able to show that the consumption of red meat leads to a significantly increased formation of carcinogenic N-nitroso compounds in the gastrointestinal tract. This increases the risk of intestinal cells mutating and spreading of existing tumor cells. That said, there is a higher risk of colon cancer.

This assessment of red meat joins a large number of empirical studies that have shown a statistically significant association between large amounts of red meat consumed and cancer, especially colon cancer. A number of meta-analyzes have now proven this.

In the opinion of the Federal Institute for Risk Assessment (BfR), however, it cannot be clearly deduced from the available data that there is a causal relationship between meat consumption and cancer or other causes of death. Most likely there are several causes. In addition to genetic factors, which were not taken into account in all studies, this also includes chemical compounds that arise, for example, during preparation. Examples of these are the heterocyclic amines that can form when grilling. The iron contained in red meat can also increase oxidative damage to intestinal cells and create potentially carcinogenic compounds. Meat, and especially meat products and sausages, contribute significantly to the absorption of saturated fatty acids, which are also linked to cancer. The salt content of processed meat products can also be an unfavorable factor with regard to the risk of cancer. Based on the current data, the World Cancer Research Fund (WCRF) and the American Institute for Cancer Research (AICR) recommend eating little red meat and avoiding processed meat (e.g. smoked or salted). Specifically, they advise that no more than 500 grams should be eaten per week, processed as little as possible. The whole food diet does not explicitly recommend meat, but does not refuse a moderate consumption of up to two meat meals of 150 g each per week.

In addition to the health risk from red meat, it should be borne in mind that a very meat-heavy diet usually neglects fruit and vegetables. This also reduces the absorption of vitamins, minerals and secondary plant substances. According to the current state of knowledge, the following can be said in conclusion: Anyone who eats little red and little processed meat, but more fruit, vegetables and whole grain products, is definitely doing something good for their health.

All articles on meat ...